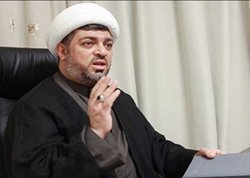 Rasa – The deputy secretary-general of Bahrain’s al-Wefaq National Islamic Society said the ‎people of this country will confront the anti-Palestinian efforts of some Arab countries‎, ‎despite the pressure from the Al Khalifah regime. ‎

RNA – In an interview with the media, Hujjat al-Islam Husayn al-Dayhi, the deputy secretary-‎general of the al-Wefaq National Islamic Society, said, “The Manama Economic Conference is ‎a workshop aimed at the sale of Palestine in regard to which the Zionist regime and the ‎United States are trying to bring the matter to an end.”‎
‎ ‎
Hujjat al-Islam al-Dayhi said that the Bahraini people, despite the pressure imposed on them ‎by the country’s tyrannical Al Khalifah regime, will confront the anti-Palestinian efforts of ‎some Arab countries.‎
‎ ‎
He noted that anyone who thinks a deal with the Zionist regime would lead to prosperity in ‎the region is “delusional.”‎

The United States says the June 25-26th conference is designed to support the Palestinian ‎economy within the framework of Donald Trump’s so-called “Deal of the Century” peace ‎plan –despite the Palestinian Authority’s boycott of the meeting and rejection of the plan, ‎which it says favours Israel.‎

The conference will bring together government and business leaders from Europe, the Middle ‎East and Asia and is considered as first stage of the Deal of the Century.‎ Global financial ‎bodies including the International Monetary Fund and the World Bank will be represented and ‎Saudi Arabia, Qatar and the United Arab Emirates have also confirmed their attendance.‎

The peace deal, called the “Deal of the Century,” which the United States has put forward to ‎end the conflict between the Palestinians and the Zionists, seeks to permanently eliminate ‎the return of the Palestinian refugees to their homeland and to resettle them in other ‎countries.‎