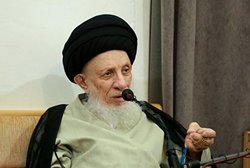 Rasa – One of the revered sources of emulation in Najaf has stated, “I wish I had your job of serving the pilgrims of the Infallible Imams.”‎

RNA – The officials and members of the al-Zahra Board of Governors, located in the al-‎Habibiyyah district of Baghdad, visited the office of Grand Ayatollah Sayyid Muhammad Sa’id ‎al-Hakim, one of the renowned sources of emulation in the Iraqi holy city of Najaf, for a ‎meeting with His Eminence.‎

In this meeting, the Iraqi scholar said, “Mourning groups and delegations for Imam al-‎Husayn revive religious rituals in accordance with religious teachings and engage in defending ‎these teachings.”‎

He added that religious rituals strengthen society and said, “Therefore, the enemies seek to ‎penetrate these rituals so that through this means, they can distance the people from the ‎religious values derived from the Infallibles, which is their source of power among the ‎nations.”‎

Ayatollah al-Hakim called for the protection of the resources of power by adhering to the ‎way of life of the Ahl al-Bayt and the connection with their beliefs, and stated, “The situation ‎of the Shi’ahs in the past system was such that they used to shout the slogan ‘no Shi’ah will ‎exist from now on’ but the Shi’ahs, with patience and perseverance were able to overcome ‎the past oppression against them.”‎
‎ ‎
His Eminence emphasized the need to pay more attention to the issue of the Master of the ‎Martyrs [Imam al-Husayn] and said, “The believers must be familiar with their duties and ‎responsibilities in relation to religious affairs and theology.”‎
‎ ‎
Stating that he envies the presence of people who serve the pilgrims of the Infallible Imams ‎in every place and on every religious occasion with sincerity, he stated, “We ask God ‎Almighty to accept the pilgrimages, supplications and to acquire divine success in order to ‎carry out one’s duties and we hope to see the result of their actions in the world and in the ‎hereafter.”‎
‎ ‎
It is worth mentioning that Ayatollah al-Hakim is one of the four leading sources of ‎emulation in Najaf.‎