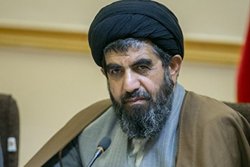 Rasa – Hujjat al-Islam Mousavi-Largani stressed upon the need to equip seminarians with ‎both contemporary and religious sciences and the need for young seminarians to strive ‎harder to answer the needs and doubts of society.‎

RNA – In an exclusive interview with Rasa News Agency, Hujjat al-Islam Sayyed Naser ‎Mousavi-Largani, the representative of the people of Falavarjan in the Islamic Consultative ‎Assembly‎, spoke about the kinds of summer activities for seminarians during the summer ‎months and said, “The young students of the Islamic seminaries usually don’t have any ‎traditional summer holidays [such as those that high school and university students have].” ‎

The member of the Clerical Faction of the Islamic Consultative Assembly ‎‎continued, “In ‎Qom, due to the extreme summer heat, the seminaries close down for two months, but at ‎the same time, the young students participate in private lessons with various teachers and ‎learn various religious sciences as extra-credit classes.”‎
‎ ‎
Regarding the situation of the seminaries ‎in the various cities of the country during the ‎summer months, Hujjat al-Islam Mousavi-Largani‎ stated, “Most of the country’s seminaries ‎‎are active during the summer season and the young seminarians, who are mostly studying at ‎the lower levels in these seminaries, gain knowledge in the presence of their own teachers.” ‎

The member of the economic committee in the Islamic Consultative Assembly ‎noted, “For ‎example, in Tehran many seminaries are planning to hold classes during the summer this ‎year.”‎
‎ ‎
He stated, “I believe that the work of a young seminarian in the present day is very difficult. ‎Today, in addition to learning religious sciences, a young seminarian ‎must also learn ‎contemporary sciences in order to answer the questions and doubts existing in the modern ‎world in order to face various issues.”‎
‎ ‎
Hujjat al-Islam Mousavi-Largani continued, “Today, young seminarians attend activities that ‎unfortunately aren’t visible. For example, the participation of the young seminarians in ‎various events in the country, including their relief efforts in regard to recent floods, was one ‎of the issues that must be addressed further.”‎
‎ ‎
In conclusion, His Eminence said, “The activities of a seminarian aren’t limited to the ‎atmosphere of the seminaries and they are continuously and actively present in various ‎activities such as jihadi and construction camps.”‎

Tags: Mousavi Largani Seminary Iran
Short Link rasanews.ir/201rsl
Share
0
Please type in your comments in English.
The comments that contain insults or libel to individuals, ethnicities, or contradictions with the laws of the country and religious teachings will not be disclosed