The jihad and revolutionary spirit of the seminarians must be strengthened 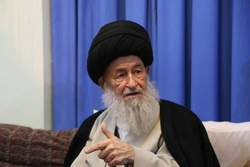 Rasa – The revered source of emulation considered the jihadi presence of the seminarians ‎and ‎clerics during the floods which affected many parts of Iran this spring as the beginning ‎of the ‎movement of the Islamic Seminaries in regard to the Statement on the Second Phase ‎of the ‎Islamic Revolution.‎

RNA – Speaking during a meeting with members of the board of directors of the Assembly ‎of Representatives of the Seminarians of the Islamic Seminary of Qom, Ayatollah ‎Mohammad-Ali Alavi-Gorgani noted that mankind always needs admonishment and advice ‎and added, “According to the narrations, all human beings, even the Infallible Imams, need ‎admonishment and advice. Therefore, all of us must accept admonishment.”‎
‎ ‎
The revered source of emulation considered the jihadi presence of the seminarians and ‎clerics during the floods which affected many parts of Iran this spring as the beginning of the ‎movement of the Islamic Seminaries in regard to the Statement on the Second Phase of the ‎Islamic Revolution issued by Supreme Leader of the Islamic Revolution [Ayatollah Khamenei] ‎and noted, “This significant presence indicated that the clergy followed the Wali Amr al-‎Muslimin [“one vested with authority over the Muslims” – namely, the Supreme Leader] and ‎the sources of emulation.”‎
‎ ‎
Ayatollah Alavi-Gorgani ‎noted, “Despite the fact that we are all saddened and affected by the ‎floods that occurred in some parts of the country, the presence of the jihadi relief workers ‎from among the people, the armed forces and the clergy in this regard was an indication of ‎the coherence of the Iranian people.”‎

In conclusion, Ayatollah Alavi-Gorgan‎ said, “The movement of the clergy during the recent ‎floods was completely jihadi and far from materialism. This spirit must be given ‎consideration and strengthened.”‎

From mid-March to April 2019 widespread flash flooding affected large parts of Iran, most ‎severely in Golestan, Fars, Khuzestan, Lorestan and other provinces. Iran was hit by three ‎major waves of rain and flooding over the course of two weeks which led to flooding in at ‎least 26 of Iran’s 31 provinces and at least 70 people died across the country. ‎