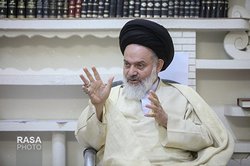 Rasa – The member of the Society of Seminary Teachers of Qom ‎emphasized, “That the ‎clergy are devotees of the Islamic Revolution is one matter and the ‎responsibility of the ‎guards to protect the people of society is another issue.”‎

RNA – In an exclusive interview with Rasa News Agency, Ayatollah Seyyed Hashem Hoseyni-‎Bushehri, the secretary of the Supreme Council of the Seminary, said the martyr Hujjat al-‎Islam Mohammad Khorsand was one of the most valuable, revolutionary, tireless and ‎hardworking personalities in the cause of the promotion of Islam and added, “This martyr ‎was always hon the line of the Imam [Khomeyni] and the Supreme Leader of the Islamic ‎Revolution [Ayatollah Khamenei] throughout his blessed life and he accompanied the Islamic ‎Revolution. He had a serious presence wherever he felt that he was needed.”‎

Hujjat al-Islam Khorsand was the Friday prayer leader of the city of Kazeroun. He was ‎stabbed in front of his residence after returning from a Laylat al-Qadr ceremony on the 23rd ‎night of Ramadhan [May 29th]. ‎
‎ ‎
The Friday prayer leader of Qom continued, “These figures and personalities are the fruits of ‎our seminaries and we have tens and hundreds of people in the seminaries, townships and ‎provincial centres who love the Revolution and gave all their existence to the Revolution.”‎
‎ ‎
He emphasized, “As emphasized by the Supreme Leader, in addition to knowledge, practice, ‎knowledge and recognition of the dear scholars of the seminaries, a serious investment must ‎be made in the revolutionary dimension of these dear ones. The role of the scholar, in ‎addition to knowledge, is to be familiar with his time and place.”‎
‎ ‎
In regard to a commemoration held in honour of the martyred Hujjat al-Islam Khorsand at ‎Qom’s Grand Mosque, Ayatollah Hoseyni-Bushehri‎ stated, “The presence of sources of ‎emulation, scholars, clerics, people in the commemorations held in Kazeroun demonstrate ‎that everyone is aware of the great damage done to the Islamic community [through his ‎stabbing].”‎
‎ ‎
The member of the Society of Seminary Teachers of Qom ‎ stated that the enemies are ‎trying to remove the physical elements of the clergy from the social realm and said, “These ‎issues aren’t new to the clergy. Both before and after the victory of the Islamic Revolution, ‎the clergy gave their lives on the path to the goals of the Revolution.”‎

He continued, “Personalities such as Shahid Beheshti, Shahid Hasheminejad and others were ‎among the clerics who sacrificed themselves for the Islamic Revolution so that it remains. ‎Therefore, we aren’t worried about the fact that the clergy are on the scene and gave their ‎lives for the Revolution and the clergy will again welcome these scenes.”‎
‎ ‎
Ayatollah Hoseyni-Bushehri said, “Of course, it’s the responsibility of the country’s security ‎officials to protect the individual capital of the Revolution and the country and it’s not easy ‎to ignore this issue. Therefore, it’s necessary to tighten the arena so the enemies can’t ‎attack.”‎
‎ ‎
At conclusion, he emphasized, “That the clergy are devotees of the Islamic Revolution is one ‎matter and the responsibility of the guards to protect the people of society is another ‎issue.”‎