The Iranian people adhere to the ideals of the Islamic Revolution 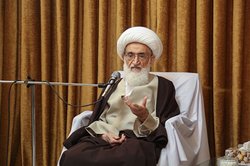 Rasa – The revered source of emulation ‎referred to the significant presence of the Iranian ‎people in the commemorations for Imam Khomeini and emphasized, “The Imam’s thoughts ‎are alive and that people are committed to the ideals of the Islamic Revolution.”‎

RNA – In a meeting with a group of missionaries dispatched from his office during the holy ‎month of Ramadhan, Grand Ayatollah Hoseyn Nouri-Hamadani emphasized that the presence ‎of the people in the commemorations of the thirtieth death anniversary of the founder of the ‎Islamic Revolution, Imam Khomeini, and the firm statements of the Supreme Leader of the ‎Islamic Revolution (Ayatollah Khamenei) against the enemies and his explanation of his road ‎map for service to the people and the expression of the correct way of resistance ‎demonstrate that the Imam’s thoughts are still alive and the people are adhering to them.‎
‎ ‎
The revered source of emulation said that today, the enemies are using their full power ‎against the Iranian people and through sanctions and threats, they seek to undermine the ‎system and stated, “It must be noted that for forty years the enemies have sought to ‎defeat the Iranian people and haven’t hesitated from any plan to harass and persecute the ‎people of Iran but these people acted with trust in God and they achieved dignity through ‎resistance.”‎

Ayatollah Nouri-Hamadani added, “Today, we must resist these conspiracies, which are the ‎same as the previous ones with a new colour. God-willing, we will be able to pass through ‎this stage with dignity. The role of managers in defeating the enemies’ plans is important and ‎managers must believe that by relying on God, trusting in the great power of the nation, ‎utilizing domestic capacities and resources and paying attention to the commands of the ‎Supreme Leader, they can take long strides, serve the people and bring the enemies to their ‎knees.”‎

His Eminence emphasized that serving the people must be the first priority of the authorities ‎and said, “Just as Imam Imam Ali said to Malik al-Ashtar, the principle and the pillar of ‎religion and those who stand against the enemies are the people. We saw this point of ‎Imam Ali during the Sacred Defence [Iran-Iraq War] and all stages of the Islamic Revolution, ‎therefore, Imam Khomeini said, ‘Our people are our blessings. Therefore, serving these ‎loyal and resistant Iranians is necessary and everyone must serve honourably without any ‎obligation amd will serve the people in any way.’”‎

He described the disappointment of the Islamic system and its ineffectiveness as a ‎permanent scheme by the enemies, and added, “Due to the favour of God, the enemies ‎haven’t succeeded until today, and after that, its leaders must be prevented from realizing ‎their goals.”‎
‎ ‎
Ayatollah Nouri-Hamadani ‎considered attention to the opinions and thoughts of Imam ‎Khomeini in the Islamic Seminary as necessary and described his personality as “unique” and ‎said, “It’s very important for the younger generation to study the character, thoughts and ‎works of the Imam, and to this day, unfortunately, this issue has not been addressed and ‎the media has been inadequate in this regard.”‎
‎ ‎
Referring to the thirty years of leadership by Ayatollah Khamenei, he considered him to be ‎superior in terms of virtue, knowledge, politics and simple living and emphasized, “Thirty ‎years of leadership against the spiteful enemies hasn’t been a simple task but through trust ‎in God, resorting to the Infallibles, discernment and planning, he has been able to protect ‎the Islamic Revolution.”‎

Tags: Nouri Khomeyni Khamenei Islamic Revolution Iran
Short Link rasanews.ir/201rr4
Share
0
Please type in your comments in English.
The comments that contain insults or libel to individuals, ethnicities, or contradictions with the laws of the country and religious teachings will not be disclosed