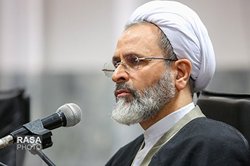 Rasa – The director of the Islamic Seminaries of Iran‎ said that the culture of defence and ‎Islamic jihad has specific ‎rational and jurisprudential foundations.‎

RNA – The First National Conference of the Flagbearers of the Islamic Revolution ‎and ‎Pioneers of the ‎Sacred Defence, celebrating the seminarians and clerics of the Sacred ‎Defence [Iran-Iraq War, was held ‎at the al-Ghadir Conference Hall of the Islamic Propagation ‎Office in Qom on June 9th. ‎ ‎

Speaking at the conference Ayatollah Alireza Arafi, the director of the Islamic Seminaries of ‎Iran, said that the holding of this conference is a declaration of humility to the pioneers of ‎the Islamic Revolution and the Sacred Defence and said, “The clerics who have progressed ‎to the frontier of martyrdom in the field of Islam and the Islamic Revolution and are ‎attending this meeting today have a very high status for us.”‎
‎ ‎
Referring to parts of Imam Khomeyni’s clerical charter, His Eminence further added, “In fact, ‎the Sacred Defence was the miracle of our era. It’s not an exaggeration to say that if there ‎was no Sacred Defence, then all the great jihadi capacities would not have emerged in our ‎nation.”‎
‎ ‎
He said that the Sacred Defence was an example of Badr, Khaybar, Hunayn and Ashura and ‎added, “The Islamic Revolution was not a constitutional or an oil movement but rather it ‎originated in Badr, Khaybar, Hunayn and Ashura. The connection of the Islamic Revolution ‎and the Sacred Defence to the previous movements of the clergy and Muslim nations ‎shouldn’t be neglected but within the framework of Islamic Revolution and Sacred Defence, ‎anything beyond all previous periods will be evaluated.”‎
‎ ‎
Ayatollah Arafi stated that the clergy, warriors, army, IRGC and Basij created a great epic ‎and added, “The Sacred Defence created a great transformation in the laws and rules ‎governing the world today to the extent that today the extension of this movement is ‎witnessed in Palestine, Syria, Iraq, Yemen and Lebanon.”‎
‎ ‎
In another part of his speech, the member of the Society of Seminary Teachers of Qom‎ ‎stated, “Jihad and defence in Islam have a clear, precise and rational logic. After the Islamic ‎Revolution, the conspirators tried to bring about evil movements and false and incorrect ‎revolutions in order to tarnish the reputation of true jihad, just as they did for the Taliban, ‎Daesh, al-Qaedah and the like.”‎
‎ ‎
He emphasized that divine command is at the head of the Islamic jihad and said, “In the ‎Sacred Defence, goals are very important. For this reason, the purpose or defence of the ‎honour and identity of the Islamic community or the opening of a horizon for the world of ‎humanity is for divine life and its soldiers are soldiers of the Battles of Badr and Karbala as ‎well.”‎
‎ ‎
Ayatollah Arafi ‎stressed that the holy jihad has a rational and jurisprudential logic and said, ‎‎“When Ayatollah al-Sistani presented a statement for the Popular Mobilization Forces, we ‎saw that it was full of the principles of jurisprudence and ethics and the pioneer of this new ‎model was our Imam and our ummah, through which we were able to revive the correct ‎logic of Islamic jihad.”‎
‎ ‎
He said, “Today, arrogant powers must know that the logic of jihad in Islam isn’t the logic of ‎fear and disbelief but at the same time our logic is not Daeshism – this is the discourse of ‎the Islamic Revolution. They must know that we aren’t Daeshi and we act with logic and ‎rationality but at the same time, we are on the stage.”‎