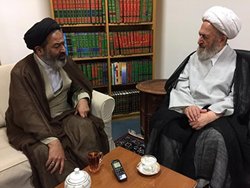 Rasa – Ayatollah Sobhani emphasized on the protection of the dignity and security of the ‎Hajj pilgrims and considered it necessary to make use of all of the capacities to hold the Hajj ‎pilgrimage in the best possible manner. ‎

RNA – Hujjat al-Islam Sayyed Abdol-Fattah Navvab, the representative of the Supreme ‎Leader of the Islamic Revolution in Hajj and Pilgrimage Affairs, visited and held discussions ‎with Ayatollah Jafar Sobhani.‎
‎ ‎
Ayatollah Sobhani expressed his pleasure in the choice of Hujjat al-Islam Navvab‎ as the ‎representative of the Supreme Leader of the Islamic Revolution in Hajj and Pilgrimage Affairs‎ ‎and said, “In some Islamic narrations, it’s said that some people even saved their income ‎for several years in order to go on the Hajj. This is a religious duty that may be granted to a ‎Muslim once in his or her lifetime.” ‎

The renowned source of emulation emphasized upon the use of all capacities to hold the ‎Hajj pilgrimage in the best possible manner, the carefully monitoring of the Hajj issues and ‎considered the importance of the provisions of the Federation of Islamic Medical ‎Associations (FIMA) agreement between Iran and Saudi Arabia on the Hajj pilgrimage. ‎

Emphasizing that the honour and dignity of the pilgrims and the safety of pilgrims are among ‎the most important issues, he emphasized upon the preventing propagation by Persian-‎speaking Wahhabi propagandists in Jannat al-Baqi cemetery, in accordance with the ‎agreements.‎

Ayatollah Sobhani also stressed upon the inspection the actions and rites of the pilgrims by ‎the clerics heading the caravans, especially in regard to the “Rami al-Jamarat” (Stoning of the ‎Devil) ritual on the day of Eid al-Adha to prevent bitter events such as those which we ‎witnessed in in previous years.‎

On September 24, 2015, thousands of people lost their lives in the deadly crush after Saudi ‎authorities blocked a road in Mina during the Rami al-Jamarat ritual, forcing large crowds of ‎pilgrims to collide.‎

The crush was the deadliest incident in the history of the pilgrimage. According to an ‎Associated Press count based on official statements from the 36 countries that lost citizens ‎in the disaster, more than 2,400 pilgrims were killed in the incident.‎

Tags: Hajj Navvab Sobhani Saudi
Short Link rasanews.ir/201rps
Share
0
Please type in your comments in English.
The comments that contain insults or libel to individuals, ethnicities, or contradictions with the laws of the country and religious teachings will not be disclosed