The enemies have made plans to penetrate 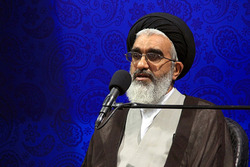 Rasa – Ayatollah Sa’idi stressed that the Islamic Resistance stops the enemies in the areas in ‎which it was planning to penetrate into ‎and said, “By paying attention to the advice of the ‎Supreme Leader, the officials ‎eliminate must the problems facing society and use the ‎capabilities of the youth well.”‎

RNA – In his Eid al-Fitr sermon at the Holy Shrine of Lady Fatimah al-Ma’sumah, Ayatollah ‎Seyyed Mohammad Sa’idi said, “In Du’a Makarim al-Akhlaq [the Supplication on Noble Moral ‎Traits], Imam al-Sajjad says to God ‘beautify me in the clothes of piety.’” ‎

Referring to the importance of piety, the custodian of the Holy Shrine of Lady Fatimah al-‎Ma’sumah added, “The clothes of piety are so that man pays attention to forgiveness, ‎supresses his anger and destroys the fire of anger among the people through the tool of ‎piety.”‎
‎ ‎
He stated, “Fasting has existed in all divine religions but after the period of fasting, a holiday ‎similar to Eid al-Fitr didn’t exist. Eid al-Fitr and the prayer of Eid al-Fitr symbolize the unity of ‎the Islamic people and this unity has caused the disappointment of the arrogant powers of ‎the world and the enemies know that they can’t achieve their goals as long as the unity of ‎the Islamic ummah exists.”‎
‎ ‎
Ayatollah Sa’idi ‎said, “The Eid of a Muslim, with all of its joy and love, is mixed with the ‎worship of God and Muslims take care that the result of a month of Ramadhan will not be ‎destroyed by the devil.”‎
‎ ‎
The teacher in the Islamic Seminary of Qom ‎referred to the importance of fasting in Islam ‎and said, “One of the effects of fasting and piety is to deal with the desires of the ego and ‎to obey God. Piety will increase the power of human resistance to Satan and through fasting, ‎the power of human resistance is increased.”‎
‎ ‎
He continued, saying, “Imam Khomeyni, with great capital of piety, created the epic of the ‎‎15th of Khordad Uprising [June 5, 1963] and overcame the sedition and riots, and during the ‎Holy Defence era [Iran-Iraq War], he stood with the element of resistance against the ‎enemies and said ‘the United States can't do a damn thing against us.’ Through his own ‎management, the Supreme Leader of the Islamic Revolution [Ayatollah Khamenei] has led ‎the Islamic Revolution for thirty years.”‎
‎ ‎
Ayatollah Sa’idi stressed that the Islamic Resistance stops the enemies in the areas in which ‎it was planning to penetrate into and said, “According to the recommendations of the ‎Supreme Leader, they must eliminate the problems of society and use the capabilities of the ‎youth well and disconnect the economy from the sale of oil and cut off the hands of the ‎ruthless smugglers and traffickers.”‎
‎ ‎
He emphasized the importance of the holy city of Qom and said, “Qom is the holy shrine of ‎the Ahl al-Bayt and the sanctity of this city must be protected.”‎

Tags: Saidi Eid al-Fitr Qom Khomeyni
Short Link rasanews.ir/201rpr
Share
0
Please type in your comments in English.
The comments that contain insults or libel to individuals, ethnicities, or contradictions with the laws of the country and religious teachings will not be disclosed