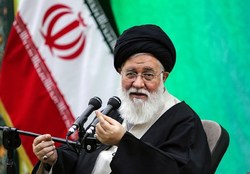 Rasa – The representative of the Supreme Leader in Khorasan Razavi ‎said, “For thirty years ‎we haven’t had Imam Khomeyni but what caused the Imam’s line to still rule ‎the Islamic ‎world is that Ayatollah Khamenei has been the political leader and wise successor ‎of the ‎Imam for the past thirty years‎.”‎

RNA – In his Eid al-Fitr sermon at the Holy Shrine of Imam al-Ridha in Mashhad, Ayatollah ‎Sayyed Ahmad Alamolhoda referred to the coinciding of this Great Eid with the anniversary of ‎the 15th of Khordad Uprising [June 5, 1963] stated, “Today, is the ‘Day of God’ from two ‎directions – this year, Eid al-Fitr coincided with the anniversary of the ‎15th of Khordad ‎Uprising.”‎
‎ ‎
The representative of the Supreme Leader of the Islamic Revolution in Khorasan Razavi ‎province said, “In fact, the ‎15th of Khordad ‎uprising was a warning to the United States that ‎these people have an army and a militia that is not considered in material calculations and is ‎the army of martyrdom. Our great Imam [Khomeyni], with the sacrifices of the martyrs of ‎the ‎15th of Khordad Uprising‎, demonstrated to the enemies of Islam that if they succeed in ‎gaining any power and force after this, the militia won’t be responsible for any martyrdom.”‎
‎ ‎
Ayatollah Alamolhoda added, “For thirty years we haven’t had Imam Khomeyni but what ‎caused the Imam’s line to still rule the Islamic world is that Ayatollah Khamenei has been the ‎political leader and wise successor of the Imam for the past thirty years. Imam has been ‎revived thirty times in the past thirty years because if today, all the awakened Muslim people ‎stood up and all the warriors of the world would gather together, we would see the majesty ‎of the Imam would be more than thirty times higher than it is today.”‎

The Friday prayer leader of Mashhad ‎pointed out the great characteristics of the late Imam ‎and said, “The Imam believed in God in such a way that he was sure God would want this ‎revolution to be connected to the universal uprising of Imam al-Mahdi. Imam addressed the ‎fighters who chanted ‘We are all your soldiers, Khomeyni’ and said, ‘No, you’re not my ‎soldiers and I’m not your soldier, we are all soldiers of God.’ This statement by the Imam ‎shows his belief in regard to this issue.”‎
‎ ‎
In regard to the continuation the path of the Imam after his death, Ayatollah Alamolhoda ‎stated, “During the past thirty years, the Supreme Leader ‎years was persistent on the ‎principles of the Imam and, due to his brilliant leadership, today, after the three decades, ‎the principles of Imam are alive in the world and up to date.”‎

Tags: Alamolhoda Khomeyni Khamenei 15 Khordad
Short Link rasanews.ir/201rpp
Share
0
Please type in your comments in English.
The comments that contain insults or libel to individuals, ethnicities, or contradictions with the laws of the country and religious teachings will not be disclosed