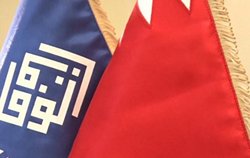 Rasa – The al-Wefaq National Islamic Society ‎responded to the Al Khalifah regime’s threats ‎of prosecution of the followers of the pages of revolutionaries on social media networks and ‎‎“This regime is superior to all other regimes ‎in regard to its oppression and tyranny‎‎.”‎

RNA – In a statement, Bahrain’s Al Khalifah regime announced that no Bahraini citizen has ‎the right to pursue user accounts which oppose the government. ‎

The Bahraini Ministry of Interior stated in a statement that anyone who follows ‎‎“revolutionaries” or follows pages on social networks which are not authorized by the ‎government would be prosecuted.‎
‎ ‎
In response to the statement, the al-Wefaq National Islamic Society, a banned Shi’ah ‎Bahraini political party, said that the Al Khalifah regime is superior to all other regimes ‎in ‎regard to its oppression and tyranny.‎
‎ ‎
al-Wefaq stated that Al Khalifah’s report card is full of unjust trials, obvious discrimination ‎and lack of respect for human rights and freedom of expression.‎
‎ ‎
Amnesty International recently announced in a report that the Al Khalifah regime prohibits ‎any public protest in this country, as well as the formation of groups and societies, and that ‎the implementation of legal reforms in Bahrain leads to greater limitations for the Shi’ahs and ‎continues to punish the citizens of this country and the regime has revoked the citizenship ‎hundreds of Bahraini citizens.‎

Since 2011, when a popular uprising began against Al Khalifah regime, Manama has ‎prosecuted hundreds of anti-regime protesters in mass trials and banned main opposition ‎groups as a part of a heavy-handed crackdown aimed at stifling opposition voices.‎

During the past seven years, thousands of anti-regime protesters have continued ‎demonstrating across the Persian Gulf country on an almost daily basis, demanding that the ‎Al Khalifah regime relinquish power and allow a just system representing all Bahrainis, most ‎of whom Shi’ah Muslims, to be established.‎

Tags: al-Wefaq Bahrain Shia Amnesty
Short Link rasanews.ir/201rpO
Share
0
Please type in your comments in English.
The comments that contain insults or libel to individuals, ethnicities, or contradictions with the laws of the country and religious teachings will not be disclosed