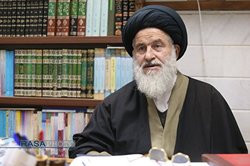 Rasa – Ayatollah Tavakkol‎ stated that asceticism and simple living were two of the manifest traits of ‎Imam Khomeyni and said, “The current lifestyle of some officials is far from the culture of ‎simple living emphasized by Imam Khomeyni.”‎

RNA – In an exclusive interview with Rasa News Agency, Ayatollah Sayyed Rahim Tavakkol, ‎the representative of the people of Mazandaran province in the Assembly of Experts, ‎pointed out that the Supreme Leader of the Islamic Revolution, Ayatollah Khamenei, has ‎repeatedly emphasized that the Islamic Republic must move on the line and ideology of the ‎late founder of the Islamic Revolution, Imam Khomeyni and added, “The Supreme Leader is ‎completely on the path of the late Imam and pursues his lofty goals without any kind of ‎distortion.”‎
‎ ‎
The teacher in the Islamic Seminary‎‏ ‏‎ of Qom said, “Today, all people in society, especially ‎the officials, must know that by adhering to Wilayat al-Faqih (Guardianship of the ‎Jurisprudent) and executing the commands of the Supreme Leader on the path of Imam ‎Khomeyni, they will be considered as true followers of the Imam.”‎

Ayatollah Tavakkol‎ stated that asceticism and simple living were two of the manifest traits of ‎Imam Khomeyni and said, “The current lifestyle of some officials is far from the culture of ‎simple living emphasized by Imam Khomeyni.”‎
‎ ‎
His Eminence stressed that some officials don’t only not follow the line of Imam Khomeyni ‎and the Supreme Leader but rather they’re also on the opposite side of the movement and ‎said, “The behaviour of some of the officials isn’t compatible ‎with the line of the Imam and ‎the Supreme Leader.”‎

He argued that luxury and arrogance have made some officials unable to understand the pain ‎of poverty and lack of people and said, “Today, some officials don’t know and cannot ‎understand that if food prices fluctuate, many lives among the vulnerable sections of society ‎are disrupted.”‎
‎ ‎
Ayatollah Tavakkol emphasized that since some officials haven’t suffered from poverty and ‎hunger, they cannot properly understand the living situation of the people, while, on the ‎basis of religious principles, the officials must put themselves at the same level of the ‎poorest people.‎
‎ ‎
In conclusion, he pointed to the characteristics of the true followers of Imam Khomeyni and ‎said, “The understanding people of Iran are no longer deceived by the slogans and claims of ‎some people because they know that the criterion of following Imam Khomeyni is the extent ‎to ‎
which he acts in accordance with his lifestyle.” ‎

He said, “People want action and the slogans and claims of some other officials cannot ‎cover ‎
their inefficient faces.”‎