Children must be educated away from the culture of violence 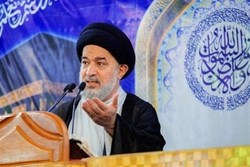 Rasa – Hujjat al-Islam al-Safi called for the education of children away from the culture of ‎violence and considered the schools and families responsible for this matter.‎

RNA – During his Friday prayer sermon delivered to a large crowd of believers at the Holy ‎‎‎‎Shrine of Imam al-Husayn in the Iraqi city of Karbala, Hujjat al-Islam Sayyid Ahmad al-Safi ‎‎addressed the necessity of prohibiting violent games and stressed, “On Eid al-Fitr, the firing ‎of celebratory gunfire must be prevented because religious law and custom has forbidden ‎the use of violent games and celebratory gunfire ‎but we are still witnessing the use of these ‎things and the harming of others.”‎

The representative of Grand Ayatollah Sayyid Ali al-Sistani described violence as an uncivilized ‎tool and added, “Sometimes violence is used to impose some thoughts and unfortunately, ‎we see it in many places to solve some problems. Existing crises don’t end with violence but ‎rather they increase them.”‎
‎ ‎
Hujjat al-Islam al-Safi considered one of the various forms of violence as violence in the ‎family and stated, “The education of children is important from childhood but unfortunately, ‎there are tools that encourage the use of violence even within the family and the child ‎believes that when he beats his brother up, his courage is proven and this is while the ‎courage of man is based on reason and the use of physical power outside of human ‎interactions.”‎

The custodian of the Holy Shrine of Abbas ibn Ali continued, “The child sits in front of a ‎screen that shows violent programs and, unfortunately, the father educates his child with his ‎culture of violence. We are an Ummah which has a lot of appropriate educational tools, but ‎why don’t we use them and have rather sought after other things?”‎
‎ ‎
Hujjat al-Islam al-Safi said, “Schools and families are obliged to educate children and young ‎people in an approach which is far from violence and murder but social networks and the ‎internet are promoting violence and preventing young people from paying attention to the ‎future.”‎

Tags: al-Safi Karbala Iraq Education Violence
Short Link rasanews.ir/201rog
Share
0
Please type in your comments in English.
The comments that contain insults or libel to individuals, ethnicities, or contradictions with the laws of the country and religious teachings will not be disclosed