Without the Islamic Resistance, Israel would attack Lebanon daily 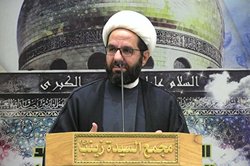 RNA – Speaking at a ceremony held at Imam al-Husayn Husayniyah in the Hayy al-Salim ‎area of Beirut, Hujjat al-Islam Ali al-Da’moush said that the goal of the sanctions imposed by ‎the United States and other Western powers is to put pressure on the Islamic Resistance ‎Front and its allies and added, “Through these pressures, the enemies sought to force us to ‎remove our hands from the Islamic Resistance and return us to the period before the Islamic ‎Resistance existed, namely the period of continuous weakness and daily violations against ‎our homeland by the Zionist regime.”‎
‎ ‎
The vice-president of the Executive Council of Hezbollah added, “The greater the pressures ‎and sanctions against the Islamic Resistance ‎Front are, the more adherence to the Islamic ‎Resistance ‎will increase. Today, this society of resistance, more than ever before, has ‎adhered to its objectives.”‎

Hujjat al-Islam al-Da’moush said resistance is the essence of Lebanon’s ability to face any ‎kind of threats or aggressive plans by the occupying Zionist regime and added, “The Islamic ‎Resistance Front ‎has given us the ability to support Lebanon against the enemies and to ‎repel them and if it didn’t exist, we would see daily attacks by Israel in Lebanon.”‎
‎ ‎
Some are seeking to provoke the United States to attack Iran

His Eminence said, “The United States, the occupying Zionist regime, Western countries and ‎some Arab countries threaten Iran and the Islamic Resistance ‎Front with war and hostility, ‎and some are also in the midst of provoking the United States to launch a war on Iran. The ‎goal of all these issues is to make Iran and Islamic Resistance ‎Front ‎surrender. This ‎surrender means abidance and humiliation in the face of the conditions imposed by the ‎United States and a return to the era of weakness.”‎
‎ ‎
Hujjat al-Islam al-Da’moush ‎emphasized that the enemies will never achieve their evil ‎objectives because we are strong and added, “We have strong faith, willpower, have loyal ‎and patient people, faith in the truth, the martyrs, the warriors, army and have a wealth of ‎experience, especially in regard to the events of 2000 and 2006.”‎

Tags: Damoush Lebanon Hezbollah Resistance
Short Link rasanews.ir/201rnJ
Share
0
Please type in your comments in English.
The comments that contain insults or libel to individuals, ethnicities, or contradictions with the laws of the country and religious teachings will not be disclosed