The people of Pakistan stand with Iran 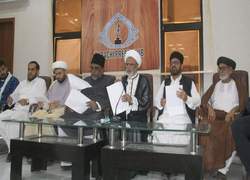 Rasa – The leaders of Pakistan’s Jafariyah Coalition ‎said that Arab countries which are hostile ‎to Iran in order to please the United States and Israel must ‎recognize that Iran is more ‎powerful than they think.‎

Hujjat al-Islam Zaydi‎ said that on the last Friday of the holy month of Ramadhan, people all ‎over the world hold marches to mark International al-Quds Day due to the command of the ‎late founder of Iran’s Islamic Republic, Imam Khomeyni, and said, “On the last Friday of the ‎holy month of Ramadhan in Pakistan, and also throughout the entire world, marches are held ‎for the liberation of al-Quds (Jerusalem) and in support of the oppressed Palestinians. The ‎Pakistani government, as an Islamic government, must officially recognize International al-‎Quds Day ‎in Pakistan.”‎
‎ ‎
The leaders of the Jafariyah Coalition ‎continued, “We regard any attack on Iran as an attack ‎on Islam and the Pakistani people also stand with Iran because in the whole region, Iran is ‎the only country standing with all its power against Israel alongside the Palestinian people ‎and supports the oppressed Palestinian people on all scenes. This is a fact that the ‎Palestinian people have repeatedly confirmed.”‎

International al-Quds is an annual event held on the last Friday of the holy month of ‎‎Ramadhan that was initiated by the Islamic Republic of Iran in 1979 to express support for ‎‎the Palestinians and oppose Zionism and Israel.‎