Muslims must demonstrate their presence in the al-Quds Day marches 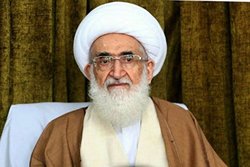 Rasa – The revered source of emulation emphasized, “The Islamic ummah must attend the ‎International al-Quds Day marches in a glorious and ‎magnificent manner and demonstrate ‎their hatred of the United States and Zionists‎.”‎

The revered source of emulation added, “Muslims of the world must participate in the ‎marches with greater magnificence, strength and sociality.”‎
‎ ‎
He stated that the United States is the leader of the arrogant powers of the world and in ‎addition to giving al-Quds (Jersualem) to the Zionist regime, it seeks to divide the land of ‎Palestine.‎
‎ ‎
Ayatollah Nouri-Hamadani ‎ continued, “The United States wants to strengthen the status of ‎the cancerous Zionist regime.”‎
‎ ‎
The prominent teacher in the Islamic Seminary of Qom said that the Zionist regime was ‎moving in a passive manner and stressed, “In all analyses, the Zionists have been weakened ‎and the Muslims of the world must declare that the fall of Israel is near and must fight ‎against this cancerous tumour in a serious manner.”‎
‎ ‎
He said, “The Islamic ummah must attend the International al-Quds Day marches in a ‎glorious and magnificent manner and demonstrate their hatred of the United States and ‎Zionists.”‎
‎ ‎
Ayatollah Nouri-Hamadani ‎emphasized, “Muslims are confident that Israel is facing its last ‎days and taking its last breaths. Therefore, we must come to the battlefield with great ‎power and show the power of Islam to the whole world.”‎
‎ ‎
His Eminence expressed hope that this year will be the year of the fall and destruction of the ‎Zionist regime.‎

International al-Quds is an annual event held on the last Friday of the holy month of ‎Ramadhan that was initiated by the Islamic Republic of Iran in 1979 to express support for ‎the Palestinians and oppose Zionism and Israel.‎

Tags: Nouri Jerusalem al-Quds Day Israel USA
Short Link rasanews.ir/201rmA
Share
0
Please type in your comments in English.
The comments that contain insults or libel to individuals, ethnicities, or contradictions with the laws of the country and religious teachings will not be disclosed