Some Arab countries trust the US instead of God 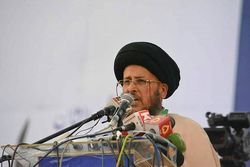 Rasa – Hujjat al-Islam Sabzewari‎ said, “The developments in the Middle East demonstrate ‎that some Islamic countries trust the United ‎States and Israel instead of depending on the ‎power of God and the unity of the Islamic ‎ummah.”‎

RNA – Hujjat al-Islam Sayyed Sibtayn Sabzewari, the chairman of the Shi’ah Council of ‎Punjab in Pakistan, said the developments in the Middle East demonstrate that some Islamic ‎countries trust the United States and Israel instead of depending on the power of God and ‎the unity of the Islamic ummah and stressed, “This will end in loss because in reality, the ‎United States wants to exploit some Arab countries and use them against Iran in order to ‎control the oil market and sell their weapons.”‎

The Pakistani Shi’ah cleric added, “The existence of the American army in the holy land of ‎Hijaz is the United States’ largest plot against the Two Holy Shrines [in Makkah and ‎Madinah].”‎

He strongly condemned the threats by the United States against Iran and said, “The Islamic ‎ummah must stand alongside Iran and instead of considering Iran as their enemy, the Arab ‎countries must consider Iran as their ally because the United States and Israel want Arab ‎countries to stand against Iran so that the Islamic ummah is divided and they can easily ‎oppress the Palestinian people.”‎
‎ ‎
Hujjat al-Islam Sabzewari further added, “The Organization of Islamic Cooperation (OIC) is a ‎good organization for resolving the differences between the Arab countries but some Arab ‎countries are trying to use this institution for their own benefit because of their hostility to ‎Iran and this is in not in the interest of the ummah in any manner. The Arab League summit, ‎which is to be held in the next few days, is not to defend the Arab countries, but to defend ‎the interests of the United States, and we strongly condemn this.”‎

Tags: Sabzewari Pakistan Iran OIC Arab League
Short Link rasanews.ir/201rlm
Share
1
Please type in your comments in English.
The comments that contain insults or libel to individuals, ethnicities, or contradictions with the laws of the country and religious teachings will not be disclosed