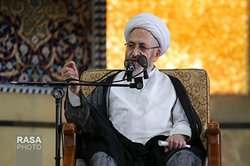 Rasa – The revered source of emulation stated that recognizing God, seeking God and ‎dependence ‎on God are part of human nature and stated, “Dependence on God isn’t ‎considered ‎alienation from the self but is like a reference to oneself.”‎

RNA – Speaking at the fifteenth session of a series of discussions on the exegesis of the ‎Holy ‎Quran held at Qom’s Hojjatieh Seminary, Ayatollah Jafar Sobhani ‎explained and ‎interpreted verse 67 of Surah al-Tawbah, wherein God Almighty says: “The hypocrites, men ‎and women, are all alike: they bid what is wrong and forbid what is right; and are tight-fisted. ‎They have forgotten God, so He has forgotten them. The hypocrites are indeed the ‎transgressors.”‎

The revered source of emulation and said, “Materialists believe that any dependence on ‎others is a kind of alienation of oneself. Therefore, man must not depend on God because ‎this kind of dependence causes alienation from himself.”‎

He stated that recognizing God, seeking God and dependence on God are part of human ‎nature and stated, “Dependence on God isn’t considered alienation from the self but is like a ‎reference to oneself.”‎

Ayatollah Sobhani ‎added, “Human beings have different dimensions and tendencies, such as ‎knowledge, morality, beauty and metaphysical. Scholars and academics have proven that ‎humanity has so far gone through 17 civilizations and in every civilization there is a tendency ‎towards worship, spirituality and seeking that which is beyond the natural laws of the ‎universe [metaphysics].”‎

The prominent teacher in the Islamic Seminary of Qom emphasized that the materialists ‎neglected the tendency of man to seek that which is beyond, adding, “If a person looks at ‎the nature of humanity through the lenses of materialism, he can’t see the truth of servitude ‎and the beauty of the universe.”‎
‎ ‎
He pointed out, “God Almighty in this verse mentions humanity in regard to its tendencies ‎beyond and emphasized that God forgetting God leads to the forgetfulness of the self. ‎Therefore, if a person doesn’t pay attention to the God and forgets Him, in fact, he has ‎forgotten his existential reality.”‎
‎ ‎
Ayatollah Sobhani ‎further stated that in the Holy Quran, God Almighty explained the stories ‎of the prophets of the past to teach lessons and said, “Man must always look at the stories ‎of the people of the past and take lessons from them and not carry out the mistakes that ‎they have committed in order to attain a degree of closeness to God Almighty.”‎
‎ ‎
Referring to the fact that man must perform his actions in a sincere manner and for the sake ‎of God in order for them to be effective in the Hereafter, His Eminence ‎stressed, “We must ‎strive so that our actions benefit us in the world and the hereafter and avoid hypocritical ‎actions because insincere ‎and hypocritical acts cause losses in this world and in the afterlife ‎and cause us to have no provisions in the Hereafter.”‎

Tags: Sobhani Quran God
Short Link rasanews.ir/201rlk
Share
0
Please type in your comments in English.
The comments that contain insults or libel to individuals, ethnicities, or contradictions with the laws of the country and religious teachings will not be disclosed