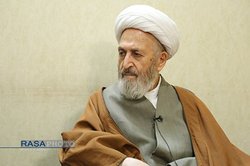 Rasa – The source of emulation stated that peace and reconciliation was imposed on Imam ‎al-Hasan and added, “The army whose slogan is peace and compromise won’t be ‎victorious.”‎

RNA – Speaking at the thirteenth session of a series of discussions on the exegesis of the ‎Quran held at Qom’s Hojjatieh Seminary, Ayatollah Jafar Sobhani said the other name of the ‎ninth chapter of the Quran, al-Tawbah, was “al-Fadhihah” which means “The Scandal” and ‎said, “This naming is due to the fact that the plots and conspiracies of the hypocrites have ‎been revealed and have disgraced them.”‎
‎ ‎
The revered source of emulation referred to the verses at the beginning of the Surah al-‎Baqarah and stated, “One of the hypocrites’ plots was to ridicule the beloved Prophet ‎Muhammad and the Muslims and in appearance, they expressed friendship but inwardly, they ‎were hostile to him.”‎
‎ ‎
He referred to the exegesis of verse 64 of Surah al-Tawbah and said, “God has revealed the ‎secrets of the hypocrites and their conspiracies against the Prophet and the Muslims through ‎the revelation of surahs al-Tawbah and al-Munafiqun and unveiled their conspiracies.”‎

Ayatollah Sobhani argued that the hypocrites express their friendship but inwardly seek to ‎harm Islam and said, “According to the exegesis of Allamah Muhammad-Husayn Tabatabai ‎on this verse, the hypocrites have always warned against this issue and a chapter was ‎revealed which disgraced them in the eyes of the Prophet.” ‎

The prominent teacher in the Islamic Seminary of Qom said, “Allamah Tabatabai ‎was ‎completely a man of knowledge, jurisprudence, mysticism and ethics. Therefore, wherever ‎Martyr Mortaza Motahhari remembered him in his books, he wrote, ‘may my soul be‏ ‏sacrificed for him’ after his name.”‎

He explained verse 65 of Surah al-Tawbah and said that man doesn’t have the right to mock ‎the verses of the divine and emphasized, “During the Battle of Tabuk, the hypocrites always ‎tried to infer that the armies of Islam could not resist the enemies’ army and the ridiculed the ‎verses of God. At that time, God revealed their conspiracies to the Prophet so that he could ‎hold them accountable.”‎
‎ ‎
Referring to the differences between din meaning “religion” and maslak meaning “path,” ‎Ayatollah Sobhani ‎stated, “Religion is a category that is related to the heavens and the ‎universe of revelation but the path is created by one’s own hands. For example, Baha’ism is ‎a path and cannot be considered a religion.” ‎

While offering his congratulations on the birthday of Imam al-Hasan al-Mujtaba, His ‎Eminence said that peace and reconciliation were imposed on Imam al-Hasan, and stated, ‎‎“When Imam al-Hasan ‎saw the lack of unity among his army, he had no choice but peace ‎because if they continued to fight, Islam would be faced with danger. If a commander-in-‎chief had executives who sell their lofty goals for material motives, they wouldn’t be able to ‎achieve anything.”‎

Referring to the fact that the army, whose slogan is peace and compromise, isn’t victorious, ‎Ayatollah Sobhani‎ said, “Those who sought worldly gains, those who are undecided and ‎those who were deceived by Mu’awiyah formed the army of Imam al-Hasan and therefore ‎there was no other way than peace.”‎