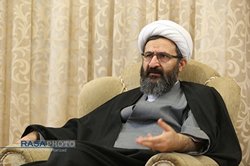 Referring to the way of life of the divine prophets regarding the ‎implementation of the ‎principles of religion in society, Hujjat al-Islam Mojtahed-Shabestari ‎said, “By looking with ‎precision at the history of the divine prophets, we find that these great people have ‎explained the religion to the people and they are also trying to implement religious principles‎ ‎in society.”‎
‎ ‎
The teacher in the Islamic Seminary said that divine principles won’t be ‎implemented without ‎the rule of Islam and religious government in society, said, “The realization of the Islamic ‎and ‎religious rule is the duty of the Islamic Seminary and the clergy.”‎
‎ ‎
He emphasized that the realization and implementation of religious foundations is formed in ‎the light of the ‎strengthening of the revolutionary discourse and said, “If we were only ‎seeking to introduce religion to society ‎and not attempt to achieve the rule of religion, we ‎have undoubtedly failed to establish the basis and ‎understand the religious concepts ‎correctly.‎”‎
‎ ‎
Hujjat al-Islam Mojtahed-Shabestari ‎stated that revolutionary discourse seeks to bring ‎religion from the scene of personal relationships to the scene of social relations, governance ‎and international relations and said, “The revolutionary discourse seeks to bring religion into ‎the realm of the relationship between society and the individual, the individual with society ‎and societies and other societies.”‎