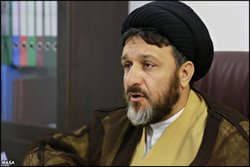 Rasa – Hujjat al-Islam Razavi-Mehr referred to the important opportunity for religious ‎propagation during the holy month of Ramadhan and emphasized, “During this month ‎missionaries must strive to explain the philosophy of fasting with a focus on Quranic verses ‎and narrations.”‎

RNA – In an exclusive interview with Rasa News Agency, Hujjat al-Islam Sayyed Jalal Razavi-‎Mehr, a teacher in the Islamic Seminary of Qom referred to the arrival of the holy month of ‎Ramadhan and said, “In addition to the blessings and favours brought with it, the holy ‎month of Ramadhan is considered as the month of familiarity with gatherings, the pulpit and ‎presence in the mosques.”‎
‎ ‎
The head of the Nour Iman Cultural Institute added, “We must know that the presence of ‎missionaries during the holy month of Ramadhan in different parts of the country, including ‎towns, villages, mosques and schools, is the best opportunity for people to learn Islamic ‎sciences, because clerics and missionaries are the theological border guards of Islam.”‎
‎ ‎
He saying that the focus of the gatherings and speeches during the holy month of Ramadhan ‎must be based on the Quran and narrations and said, “Of course, the mention of the ‎jurisprudential issues of fasting and other acts of worship is also important but besides this, ‎the missionaries must strive to explain the philosophy of the holy month of Ramadhan and ‎fasting for the people.”‎
‎ ‎
Hujjat al-Islam Razavi-Mehr‎ stated, “The mosques are places of listening to the Quran and ‎the fluttering of the angels and every household which recites the Quran, restores its Islamic ‎human dignity and fulfills the charging capacity of faith and majesty and in one word, this ‎month calls people toward worship and servitude.”‎
‎ ‎
He said that value of Ramadhan must not be easily lost and noted, “Ramadhan is a month ‎wherein the people of purgatory are crying over have lost it and the people of neglect don’t ‎perceive it and the happy ones are those who consider the sweet moments of the holy ‎month of Ramadhan as the most powerful capital for themselves.”‎
‎ ‎
The vice-president of the Association of Representatives of Seminarians added, “The holy ‎month of Ramadhan, which the prayer of Eid al-Fitr demonstrates the unity of the Muslims, ‎has the highest capacity to identify the face of arrogance and Zionism and the reactionary ‎figures in the region. Therefore, we hope that, as with the voice of our Lord during the ‎nights and dawns of the month of Ramadhan, especially during the Nights of Power, we feel ‎the satisfaction with thirst on our lips. On Eid al-Fitr, we will see the ultimate victory of ‎Muslims around the world over disbelief and polytheism.”‎

Tags: Razavi-Mehr Ramadhan Fasting
Short Link rasanews.ir/201rhh
Share
0
Please type in your comments in English.
The comments that contain insults or libel to individuals, ethnicities, or contradictions with the laws of the country and religious teachings will not be disclosed