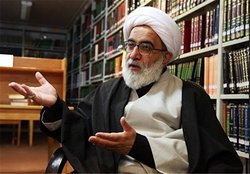 Rasa – Ayatollah Shabzendehdar ‎said, “During the holy month of Ramadhan, religious ‎scholars must promote local production in order to improve the economy, defend Islam and ‎the school of the Ahl al-Bayt.”‎

RNA – Speaking at a meeting to explain and analyze the Statement of the Second Phase of ‎‎the Islamic Revolution, Ayatollah Mohammad-Mahdi Shabzendehdar, a jurisprudent member ‎‎of the Guardian Council, referred to the economic arena as one of the most important parts ‎of this statement which issued by the Supreme Leader of the Islamic Revolution, Ayatollah ‎Sayyed Ali Khamenei.‎

The member of the Society of Seminary Teachers of Qom added that according to the ‎teachings Islam, the economy is a means to reach lofty goals such as spiritual and moral ‎perfection and added, “The economy, as an instrument, is a pillar and if material things ‎aren’t properly executed and organized, the ordinary people will suffer and therefore, the ‎economy is very important.”‎

Ayatollah Shabzendehdar said that at the present time, the enemies and the arrogant powers ‎rally against us in order to prevent us from progressing economically and they have ‎renounced the path of God and relying on them is a grave mistake that we have made and ‎added, “We must move towards the Resistance Economy as an indicator of progress. The ‎Supreme Leader has always emphasized it as a reliable foundation in which to confront the ‎enemies.”‎

His Eminence stressed that all segments of society should be based on their own capabilities ‎without relying on the enemies and said, “This country needs officials and religious people ‎who work in accordance with the teachings of Islamic law as well as young experts who are ‎active and dynamic in various fields.”‎

A member of the Guardian Council said that during the holy month of Ramadhan, religious ‎scholars must promote local production, the economy, the defence of Islam and the school ‎of the Ahl al-Bayt and said, “For example, it’s more important for the members of society to ‎do what they can to inject their capital into the market and production and be economically ‎active in support of the victory of Islam. Their intention should be to invest in their hereafter ‎which isn’t compatible with investing in this world.”‎

Ayatollah Shabzendehdar added, “The people of society must guard against excess and ‎waste, which contributes greatly to building a society far from poverty, especially in the ‎present circumstances.”‎
‎ ‎
On February 11th, the Supreme Leader published a statement entitled “The Second Phase of ‎the Islamic Revolution,” in which he mentioned the strategies, guidelines and programs that ‎contained measures that the society and revolutionary officials must work on to achieve a ‎more faithful and progressive Islamic society.‎

Tags: Shabzendehdar Iran Economy Ramadhan
Short Link rasanews.ir/201rf7
Share
0
Please type in your comments in English.
The comments that contain insults or libel to individuals, ethnicities, or contradictions with the laws of the country and religious teachings will not be disclosed