Clergy have been oppressed from before the Islamic Revolution until today ‎ 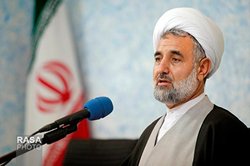 Rasa – Hujjat al-Islam Mojtaba Zonnour ‎said that the clergy have been oppressed from ‎before the Islamic Revolution to the present ‎day.‎

RNA – In an exclusive interview with Rasa News Agency, Hujjat al-Islam Mojtaba Zonnour, a ‎member of the National Security and Foreign Policy Committee of the Islamic Consultative ‎Assembly Agency, said that the clergy have been oppressed from before the Islamic ‎Revolution to the present day and added, “Today, some people look at a number of clerics ‎who are active in different [government and administrative] offices and think that the clerical ‎body also enjoy these same facilities.”‎
‎ ‎
The representative of the people of Qom in the Islamic Consultative Assembly‎ continued, ‎‎“Those clerics who have accepted various responsibilities in different offices have been ‎driven by the sense of duty and need for the community. Today, it must be noted that most ‎of the clergy don’t enjoy the minimum living standards as single students often don’t receive ‎any special stipend and married students also have a hard time as they only receive a ‎stipend between 300,000 and 800,000 [$21-57 US] a month.”‎

Hujjat al-Islam Mojtaba Zonnour said, “Today, the perspective of the Islamic Seminary that ‎the seminaries must not use government facilities aggravates the situation and the ‎seminarians are having a hard time supplying their basic needs.”‎
‎ ‎
He said that most of the laypeople aren’t aware of the living conditions of the majority of ‎seminarians and clerics and they suppose that the clergy don’t have to deal with welfare ‎problems and added, “Misconceptions about seminarians, social complexes, ‎counterrevolutionary lines, opposition to the principle of religion, the Islamic system of ‎government, the Islamic Revolution and the clergy on one hand, and the pressure by foreign ‎media and psychological operations via social media on the other hand, cause some ‎laypeople to be affected by evildoers and the martyrdom of Hujjat al-Islam‏ ‏Mostafa ‎Ghasemi is among such events.”‎

It should be mentioned that, on April 27th, Hujjat al-Islam‏ ‏Mostafa Ghasemi, a 46-year-old ‎cleric, was shot dead in front of the Islamic Seminary of Hamadan. The murderer, after ‎wounding two police officers, was shot dead on April 28th.