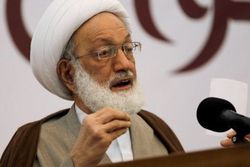 A new report shows major Bahraini opposition figures and activists, who have been stripped of their nationality by Manama, are not among hundreds of those people whose citizenship will be restored under a recent amnesty order by the king of the Persian Gulf’s tiny island country.

RNA - Since 2011, when a popular uprising began against Al Khalifah regime in Arab kingdom, Manama has prosecuted hundreds of anti-regime protesters in mass trials and banned main opposition groups as a part of a heavy-handed crackdown aimed at stifling opposition voices.

During the past seven years, thousands of anti-regime protesters have kept on demonstrating across the country on an almost daily basis, demanding that the Al Khalifah regime relinquish power and allow a just system representing all Bahrainis, most of whom Shia Muslims, to be established.

Scores of people have lost their lives and hundreds of others sustained injuries or got arrested as a result of the Al Khalifah regime’s crackdown. Furthermore, Manama has revoked the nationality of hundreds of protesters, opposition figures and activists as a punishing measure.

Bahrain’s leading Shia cleric, Sheikh Isa Qassim, is among those who has been stripped from his Bahraini nationality in 2016, when a Bahraini court convicted him of illegal collection of funds and money laundering, and sentenced him to one year in jail suspended for three years.

Qassim strongly rejected the allegations and the ruling, which sparked widespread demonstrations across the kingdom.

Back in February, the UK-based Salam for Democracy and Human Rights group, a civil NGO observing and promoting human rights in general and human rights in Bahrain in particular, said in a statement that the Al Khalifah regime had up to the time stripped 815 people of their citizenship since 2012.

The state news agency BNA report, which announced the news about the royal order, did reveal the identity of the 551 people.

On Saturday, Bahrain’s Interior Ministry published a list of 551 people, which a government spokesperson said was aimed to give them “an opportunity to rehabilitate themselves”, adding that Manama had begun the process of reinstatement for those on the list.

However, on Monday, Reuters reported that it had reviewed the list but it could not find on it the names of prominent figures, such as cleric Isa Qassim.

Another UK-based activist group, the Bahrain Institute for Rights and Democracy (BIRD), however, raised the number to at least 990 people, who have lost their citizenship since 2012.

“Since amendments to the anti-terror law were passed in 2014, the use of revocation of citizenship has increased dramatically, in many cases targeting journalists, human rights defenders and critics of the government,” BIRD’s director Sayed Ahmed al-Wadaei told Reuters on Sunday.

Wadaei himself, a prominent activist, was stripped of his citizenship in 2015.

The Reuters report added that some of those to whom citizenship was returned remain in prison.

The recent flood symbolizes the solidarity of the Islamic Resistance Front

Tragedy of silence: Enablers of Saudi bloodshed in Yemen