Pakistan’s leaders should learn path of resistance from Iran 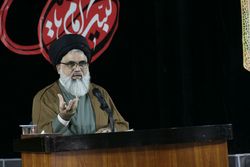 Rasa – Hujjat al-Islam Naqvi ‎said that Ayatollah Khamenei said ‘the cost of resistance is less ‎than the cost of compromise’ and stressed that Pakistan’s leaders must learn from this.‎

RNA – In his Friday prayer sermon delivered to a large and fervent crowd of believers in ‎‎the‎ ‎‎‎‎‎‎‎Pakistani city of Lahore, Hujjat al-Islam Sayyed Jawad ‎Naqvi ‎referred to the market blast in ‎the Pakistani city of Quetta on April 12th which killed at least twenty people and said, “The ‎grievous incident in Quetta occurred in the place where the majority of terrorist events have ‎taken place – that is the vegetable market which has become a slaughtering place for ‎believers and pilgrims. The filthy seeds of terrorism have been deeply and formally planted ‎in Pakistan. Capital was invested from both inside and outside the country by Arabs and the ‎enemies of Pakistan. They have strengthened the roots of terrorism in the country although ‎they claim that they have ended their support of terrorism in Pakistan. We pray for these ‎martyrs and express condolences to their families and pray for intercession for the martyrs ‎from God.”‎

The principal of Jami’at Urwat ‎‎al-Wuthqa Islamic ‎Seminary in Lahore explained, “Since ‎Pakistan is under pressure from the International Monetary Fund (IMF) and other political ‎organizations, Western countries have put very heavy pressure on Pakistan and they have ‎paralyzed the Pakistani economy and the country has been indebted to the IMF for a long ‎time. The current government announced that one day that we will not take loan from the ‎IMF, but the same day they started negotiations with them.”‎

He said, “We are suffering as a result of all of the decisions that were taken in the past from ‎the time of President Muhammad Zia al-Haqq until today. Therefore, we should look at the ‎decisions that are being taken today and realize what their results will be in the future. ‎Muhammad ibn Salman [the Crown Prince of Saudi Arabia] has said that ‘we had created an ‎extremist group of Wahhabis on the demand of West and today they have told us to end ‎that and start liberalism and we have started that.’”‎

In regard to the implementation of laws which punish adultery and homosexual sex with ‎death by stoning law in Brunei, Hujjat al-Islam Naqvi ‎‎said, “The issue of Brunei has not been ‎mentioned in our media. This tiny country is a monarchy and the system of shari’ah has ‎been formally implemented there but this country runs under the Saudi system.”‎

His Eminence referred to the United States’ designation of Iran’s Islamic Revolutionary Guard ‎Corps (IRGC) as a terrorist organization and the imposition of sanctions on it and said, “In ‎this regard, the Supreme National Security Council of Iran was responded and officially ‎declared the United States as a terrorist government and the United States Central Command ‎‎(CENTCOM) as well as all its affiliates as terrorist groups. This is not just a statement of ‎condemnation. What this implies is that from now on, the IRGC will act in accordance with ‎the laws of terrorism against the United States. If the United States has said the IRGC is a ‎terrorist organization, then Iran will deal with them accordingly. Iran has replied tit for tat. ‎Iran hasn’t shown any fear or weakness. This means if we see American forces anywhere, ‎we will not consider them as an American force but rather as terrorists and our behaviour will ‎be same as dealing with terrorists.”‎

He ‎stressed that the greatest investment that Iran did in the Middle East was the ‎establishment of Hezbollah and said, “They are a very powerful force to the extent that they ‎cannot be defeated. We can even say that Iran has not strengthened their own forces to the ‎extent they have strengthened Hezbollah. Israel a deadly monster which usurps lands, ‎defeated a powerful force like Egypt, annexed the West Bank from Jordan, occupied ‎parts of ‎Syria and Beirut but today, this same Israel is shivering in fear in their own land. This is the ‎success of Hezbollah whose secret is Iran. These actions by Iran are a disgrace for Trump ‎and the United States.”‎

Hujjat al-Islam Naqvi ‎said that in a speech to the Iranian government, people and forces the ‎Supreme Leader of Iran’s Islamic Revolution, Ayatollah Khamenei, said that presently, Iran is ‎under pressure to compromise. One path is that we should submit to the enemies and do ‎what they want us to do. The other path in front of us is resistance, whereby we fight with ‎them or compromise. He said ‘the cost of resistance is less than the cost of compromise.’ ‎

‎“Pakistan’s leaders must learn from this and someone should teach this to them,” he said.‎