There must be a campaign against narcotics in Iraq 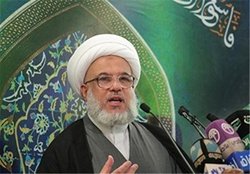 RNA – In his Friday prayer sermon delivered to a large and fervent crowd of believers in the ‎‎Iraqi holy city of Karbala’s Holy Shrine of Imam al-Husayn, Hujjat al-Islam Abdul-Mahdi al-‎‎Karbala’i‎ strongly criticized the spread of narcotics in Iraq, saying, “In recent years, we have ‎witnessed the spread of narcotics in Iraq but there hasn’t been a serious fight against it.”‎

The representative of Grand Ayatollah Sayyid Ali al-Sistani in Karbala‎ called for the launch of ‎a campaign to fight corruption in Iraq and added, “Social and economic problems, such as ‎poverty and unemployment, are the main causes of drug addiction in Iraq.”‎

He said, “Combating such social problems is everyone’s concern, but first and foremost, ‎families must be accountable in regard to their children and preventing them from having ‎unsuitable friends and pursuing their affairs, especially in schools and then, establish the ‎necessary rules to fight narcotics.”‎
‎ ‎
Hujjat al-Islam al-Karbala’i ‎condemned Daesh’s murder of fifty Yazidi girls in Syria and said, ‎‎“In contemporary history, we haven’t seen such brutal crimes very often. We, while ‎expressing solidarity with the Yazidi citizens, we call on the Iraqi government and ‎international organizations to investigate this crime perpetrated by Daesh and deal with its ‎agents.”‎

His Eminence also referred to the raid carried out by Daesh on the town of al-Nukhayb in the ‎western al-Anbar Governorate and said, “The Iraqi government must prevent Daesh from ‎carrying out further crimes in al-Nukhayb‎ and confront the factors that threaten the security ‎and stability in the country.”‎
‎ ‎
It’s worth noting that the remaining elements of the Daesh terrorist movement have recently ‎committed crimes in different areas, such as the desert of al-Anbar Governorate. One ‎example of this is their execution of five fishermen.‎