The slogan ‘Down with America’ defeated the enemies 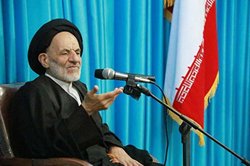 Rasa – Hujjat al-Islam Ebadi said, “Some expect that the slogan ‘Down with America’ isn’t ‎said but these ‎slogans have defeated enemies and these slogans are effective.”

RNA – Speaking at a conference on the empowerment of the organs of the mosques in ‎Birjand, Hujjat al-Islam Sayyed Alireza Ebadi, the representative of the Supreme Leader of ‎the Islamic Revolution in South Khorasan province, said, “The environment of mosque must ‎be a religious environment and this environment is interpreted as a house of God.”‎
‎ ‎
The Friday prayer leader of Birjand stated that mosques must be at the level of the Islamic ‎Revolution, saying, “Many of the misfortunes of man come from his soul and the greatest ‎enemy of man is his own soul.”‎
‎ ‎
He stated that if a man has refined his soul, he will not suffer any harm and added, “Man ‎must cleanse his soul by attending the mosque.”‎
‎ ‎
Hujjat al-Islam Ebadi stressed that mosques must be the manifestations with love and ‎hatred. Therefore, this subject must be taught to the people and based on that, whatever ‎they must be for God.‎
‎ ‎
His Eminence added, “Some expect that the slogan ‘Down with America’ isn’t said but these ‎slogans have defeated enemies and these slogans are effective.”‎