Lebanon protected itself with the equation of the army, nation and resistance 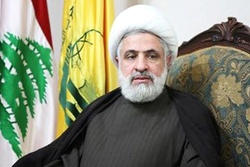 Rasa – The deputy secretary-general of Hezbollah ‎said that the alliance and unity of ‎Lebanon’s military, nation and resistance prevented the Syrian crisis from recurring in ‎Lebanon.‎

RNA – Speaking at a gathering of the Muslim Scholars of Lebanon, Hujjat al-Islam Na’im ‎Qasim, the deputy secretary-general of Lebanon’s Hezbollah ‎Islamic ‎Resistance movement, ‎‎said that this country stood firm due to the tripartite equation of the Islamic Resistance – the ‎army, nation, and resistance – and with courage, it stood on the front line against the Zionist ‎regime.”‎
‎ ‎
The Shi’ah cleric added, “The resistance of Lebanon fought courageously and daringly against ‎Israel and also supported the army. Lebanon, with the same equation, was vigilant of its ‎stability while the region, especially Iraq and Syria, were in turmoil.”‎
‎ ‎
He said, “It was the solidarity of the triangle of the army, people and resistance which ‎brought victory.”‎

Hujjat al-Islam Qasim stated, “Many had argued that Lebanon would drown in the Syrian ‎crisis but it turned out that Lebanon remained proud and achieved success in line with the ‎interests of Syria in opposition to others.”‎
‎ ‎
His Eminence also noted the formation of a new Lebanese government and said that ‎Hezbollah looks at this government as a place to serve the people and properly manage the ‎country’s political scene‏.‏

He said that thanks to the tripartite equation, Lebanon succeeded in implementing the ‎proportional law in the May 6, 2018 parliamentary elections and the new government was ‎formed in such a way that all the parties are based on the results of the election. ‎

Hujjat al-Islam Qasim ‎added, “We in Hezbollah consider the new government as a service to ‎the people, not a place for personal, sectarian and party achievements. The government is ‎a place for forgiveness and sacrifice. Hezbollah ministers will be ‘model’ in their actions, as in ‎the past, and will work in line with the interests of the people with honesty.”‎

Tags: Qasim Lebanon Hezbollah Resistance
Short Link rasanews.ir/201rOJ
Share
0
Please type in your comments in English.
The comments that contain insults or libel to individuals, ethnicities, or contradictions with the laws of the country and religious teachings will not be disclosed