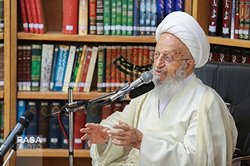 Rasa – The revered source of emulation ‎stressed that the end of Wahhabism is near and ‎described Saudi Arabia as the birthplace of Takfiri terrorism.‎

RNA – In a visit with the dean of Allameh Tabataba’i University and members of the ‎‎“National Conference on the Critique of Salafist Principles,” Grand Ayatollah Naser Makarem-‎Shirazi said that Salafism and Wahhabism are among the great disasters that have afflicted ‎Islam and which must be confronted and said, “In reality, the roots of Salafism and ‎Wahhabism are in inflexibility and extremism and its product is nothing but destruction, killing ‎and moral corruption.”‎
‎ ‎
The revered source of emulation emphasized that Wahhabism and Salafism must not be ‎interpreted as Islam and said, “They act according to their own desires because of their ‎inflexible thinking and due to their selective choice of Quranic verses.”‎

Ayatollah Makarem-Shirazi considered Wahhabism and Takfirism as an example of the ‎Quranic verse “We believe in some and disbelieve in some” [4:150] and stated, “Wahhabism ‎has created a complete distortion in Islam and its root is also political.”‎

His Eminence explained that the end of the life of Salafism and Wahhabism is near and ‎added, “Thirty years ago, before the collapse of the Soviet Union, we wrote a book entitled ‎‎‘The End of the Life of Marxism’ and we now say that the end of Wahhabism and Salafism is ‎near.”‎
‎ ‎
He considered the product of Salafism and Wahhabism ideologies as Daesh, Takfiris, ‎destruction and killing and added, “They are thrashing in an effort to survive and of course, ‎their efforts will be worthless and will not achieve anything.”‎
‎ ‎
Ayatollah Makarem-Shirazi ‎emphasized the need for an active encounter against Wahhabis ‎and Takfiris, saying, “The product of the Wahhabi ideology is not destruction and ‘sex jihad’ ‎was a great scandal for Wahhabism and the world has realized this.”‎