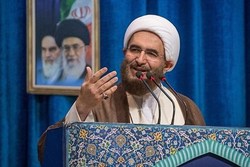 RNA - Addressing a large and fervent congregation of the people in Tehran on Friday, Hojjatoleslam Haj Ali Akbari said, "The Supreme Leader has urged the Iranian officials to pave the way for a new generation of young managers in the country."

He noted that the Supreme Leader described the youth as a generation who steps up to start another part of the great jihad (great efforts) to build a great Islamic Iran.

He also pointed to the massive turnout of Iranians in February 11 rallies across the country to celebrate the 40th Anniversary of the victory of 1979 Islamic Revolution, and said, "The huge participation of people in February 11 rallies was one of the signs of Iranian’s collective glory, which, once again, showed the nation’s unity and integrity to the world."

In his statement on Wednesday, Ayatollah Khamenei reiterated his firm opposition to talks with Washington, describing it as useless.

"On the US, settlement of no problem can be imagined and negotiations with that country will yield no fruit but material and spiritual damage," the Supreme Leader stressed.

Ayatollah Khamenei also underscored that the Iranian nation in addition to the criminal US, considers a number of European governments as "cunning and unreliable", adding that the government should set boundaries with them and should not withdraw even a step from its revolutionary and national values, should not fear their hollow threats, should consider the country and nation's honor in all conditions and resolve its solvable problems with them through talks, but of course from a revolutionary stance.

The Leader also made an implicit mention of US coalition-making efforts against Iran, and said the US once relied on a number of traitor Iranians or several fighter jets and helicopters to overcome the Iranian nation, but the growing power of the Islamic Republic throughout time has now forced it to resort to a big coalition of tens of hostile or intimidated governments, "and of course, it will be defeated again in this confrontation".

"Today, the (US) challenge is the presence of the mighty Iran at the borders of the Zionist regime blocking the illegitimate influence of the US in West Asia and the Islamic Republic's support for the struggles of the Palestinian fighters in the heart of the occupied territories and defending the flag of Hezbollah and resistance hoisting across the region," he added.

Referring to Iran's growing power despite all western sanctions and pressures, Ayatollah Khamenei noted that blocking Iran's access to simple weapons was the West's main problem in the past, but today its problem is preventing transfer of advanced Iran-made arms to the resistance forces.

He said the world is now witnessing new moves by the Islamic Awakening movement based on the paradigm of resistance against the US and Zionism's hegemony, as well as the failure of the US policies in West Asia and crippling of their traitor collaborators in the region and the Islamic Republic's powerful political presence in West Asia.

Ayatollah Khamenei also said that the Islamic Republic has special features, adding that everything has a lifespan except for "the universal mottos of this religious revolution because virtues like freedom, ethics, spirituality, justice, independence, honor, rationality and brotherhood are in the nature of humanity". He underlined that the revolution is positively sensitive to criticism, but never distances itself from values. It is flexible and ready to correct its mistakes but is not revisable and passive. It has not faced stagnation after being formed and does not lack sense and understanding of the new phenomena and situations, he added.

It is highly bound to its principles and highly sensitive to the boundaries with its rivals and enemies. The revolution, since the very first day has not been merciless, has not shed blood and has not been passive and uncertain. It has not fired the first bullet in any battle but it has defended itself after the enemy's attack and given a crushing response to the enemy. It has defended the oppressed people and has clearly and bravely stood against the bullying of powers.

Ayatollah Khamenei also entrusted the young generation with 7 missions for the second long stride of the Islamic Revolution in the fields of science and research, spirituality and ethics, economy, justice and fighting corruption, independence and freedom, national honor, foreign relations and setting boundaries with enemy and lifestyle.

On February 11, Huge masses of people from all walks of life converged on streets and squares all over the country to express their support for the cause and ideals of the Islamic Revolution.

A sum of 6,500 Iranian and foreign journalists, reporters and photographers covered the Bahman 22 (February 11) rallies this year.

In Tehran, demonstrators then congregated at the Azadi Square, Tehran's main square and the site of major national rallies over the past four decades.

According to Fars News Agancy, the nationwide rallies also prove to the world that the brave Iranian nation is fully ready to resist and challenge the enemies of the Islamic Republic.

On this day 40 years ago, people took to the streets to celebrate the collapse of the Pahlavi Dynasty and the emergence of the new era.