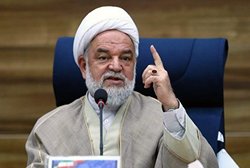 Rasa – Hujjat al-Islam Yaqoubi said, “The Islamic Revolution and Islamic system of Iran led to the establishment of pure Muhammadan Islam in the place of American Islam in Iran.”

RNA – Speaking at a meeting with some cultural officials in North Khorasan province, Hujjat al-Islam Abolqasem Yaqoubi, the representative of the Supreme Leader of the Islamic Revolution in North Khorasan province, praised the glorious presence of the people at 22 Bahman [11 February] marches and called the anniversary of the Islamic Revolution a “Day of God.”

“We must review the lesson of the Islamic Revolution every year during the Ten-Day Dawn period because the repetition of important lessons isn’t objectionable,” he said in this regard.

Hujjat al-Islam Yaqoubi continued, “In the Islamic Revolution, pure Islam, the book [Quran] and tradition replaced superstitious and heretical Islam. For this reason, the first achievement of the Revolution was to establish Islam and to expel superstition and heresy.”

Tags: Yaqoubi Iran Islamic Revolution 22 Bahman American Islam Khamenei Khomeini
Short Link rasanews.ir/201rMa
Share
0
Please type in your comments in English.
The comments that contain insults or libel to individuals, ethnicities, or contradictions with the laws of the country and religious teachings will not be disclosed