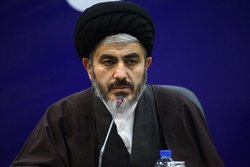 Hojjat al-Islam Qureshi said, “Participating in the great march of 22nd Bahman (11th February) is the same as protection of the oppressed.”

RNA - Emphasizing that the message of the epic presence of the Iranian people in the celebration of the 40th anniversary of the Islamic Revolution is the continuation of the path of the Imam Khomeini and the Iranian martyrs, hojjat al-Islam Seyyed Mehdi Qureishi, the representative of the Wali Faqih (Ayatollah Khamenei) in the West Azerbaijan, said yesterday, “This year, the presence of the people in the 22nd Bahman (11th February) is unprecedented.”

He stated that the massive participation of people will increase the authority of the Islamic Iran in the international arena, and added, “All of Iranian people, especially the people of Azerbaijan, with any ethnic, religious background, came along with their compatriots, to show their loyalty to the Islamic Revolution.”

Saying that, the Islamic Revolution revived the identity of Muslims in the world and brought blessings to the people of Iran and other peoples of the world, he said, “The great rally of 22nd Bahman (11th February) meant following the path of the Ayatollah Khamenei and supporting the oppressed people of the world.”

“The passionate presence of young people, especially the fourth generation of the Revolution in the celebration of the 40th anniversary of the revolution is also interesting and it shows that the future generation of (our) revolutionary country is educated with religious thought and there is no gap between the generations of revolution”, hojjat al-Islam Qureshi continued.

He described the 22nd Bahman (11th February) rally as a strong response to rhetoric of the United States and other enemies of Iran, and added that the Islamic Revolution of Iran is literally independent of the West's selective ideas and has been able to overcome all the ideologies of Western political thinkers.

Tags: Wali Faqih Iran Islamic Revolution
Short Link rasanews.ir/201rMW
Share
0
Please type in your comments in English.
The comments that contain insults or libel to individuals, ethnicities, or contradictions with the laws of the country and religious teachings will not be disclosed