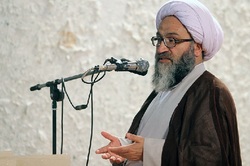 Ayatollah Haidari said, “The arrogant powers and Zionism should know that the Iranian nation is forever alongside the Islamic Revolution and the Velayat-e Faqih.”

RNA - Ayatollah Mohsen Heidari, representative of Khuzestan province in the Assembly of Experts of the Leadership, said in a crowd of journalists at the march marking the fortieth anniversary of Iran’s Islamic Revolution, stating that the passionate presence of the people proved that Iranian people follow their Supreme Leader Ayatollah Khamenei and said, “The message of such presence to the world is endurance and resistance against the hardships facing the goals of Islam for which Islamic Revolution endeavor.”

Representative of the Assembly of Experts of the Leadership in Khuzestan province said, massive march of the Iranian people in 22nd Bahman (11th February, Anniversary of the Islamic Revolution of Iran) throughout Iran spread the message of hope to the weak and oppressed and deprived nations.

Ayatollah Haidari highlighted the resistance against the arrogance as the other message of 11th February march and stated, “This presence has a serious message to the Arrogance (US and its allies) and Zionism, that is Iranian nation continual support of Islamic Revolution and the Velayat-e faqih (Guardianship of the Islamic Jurist) and their unhesitatingly help to them.”

Tags: Ayatollah Haidari Iran Velayat-e Faqih
Short Link rasanews.ir/201rMV
Share
0
Please type in your comments in English.
The comments that contain insults or libel to individuals, ethnicities, or contradictions with the laws of the country and religious teachings will not be disclosed