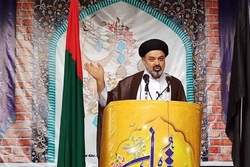 Rasa – Referring to the murder of Zakariya Badir al-Jaber, Hujjat al-Islam al-Musawi al-‎Safavi ‎said, “The killer justified his killing of his innocent child ‎by associating him with ‎imamate and wilayah.”‎

RNA – Addressing the mourners on the occasion of the anniversary of the martyrdom ‎of Lady Fatimah al-Zahra, Hujjat al-Islam Sayyed Muhammad-Hadi al-Musavi al-Safavi, ‎the president of Anjuman-e Shari’ Shi’ayan (Sharia law Society for Shiites) in Indian-occupied Jammu and Kashmir, ‎said, “The short life of Lady Fatimah al-Zahra is a great moral and spiritual lesson. The ‎life of this lady is the complete code of life for a female scholar.”‎

The Kashmiri Shi’ah scholar said that the role Lady Fatimah ‎was in defence of ‎imamate and wilayah (guardianship), which the Prophet Muhammad demonstrated. ‎

He added that Lady Fatimah defended imamate in her historical sermons. ‎

In other remarks, Hujjat al-Islam al-Musawi al-Safavi condemned the killing of Zakariya ‎Badir al-Jaber, an innocent six-year-old boy in Madinah, Saudi Arabia who was ‎beheaded by a taxi driver and said, “The killer justified his killing of his innocent child ‎by associating him with imamate and wilayah.”‎

His Eminence said that this dreaded accident occurred in the City of the Prophet ‎‎(Madinah al-Nabi), in regard to which Lady Fatimah ‎indicated that horrible events ‎would in the ummah about 1400 years ago. ‎

He said that if the ummah had not been in danger of deviation after the death of the ‎Holy Prophet, then Islam would not have had to face these difficulties, nor would Ali al-‎Asghar, the six-month-old son of Imam al-Husayn, have been slaughtered by the ‎enemies on Ashura nor would six-year-old Zakariya have been beheaded in front of his ‎mother. ‎

Hujjat al-Islam al-Musawi al-Safavi ‎said that the Saudi government has behaved as an ‎‎“evil stepmother” against its Shi’ah population and has tortured them and spread ‎hatred towards Shi’ahs among the people of the country. ‎

In conclusion, he referred to the trip of the so-called “Imam of Peace,” Muhammad ‎Tawhidi, a deviant Australian Shi’ah cleric, to India and stated that he is a “British ‎agent” who is attempting to create divisiveness and dissension among Muslims and ‎added, “Sectarian have groups used Tawhidi to achieve their goals. The main purpose of ‎this visit is to spread the divisiveness and dissension ‎among Muslims.”‎