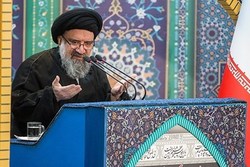 RNA - Addressing a large and fervent congregation of the people in Tehran on Friday, Ayatollah Khatami said, "Iran’s ballistic missiles will land on the aggressors like thunderbolt."

The senior cleric, meantime, underlined that Iran’s missile program is of defensive and deterrent nature.

Iran has gained self-sufficiency in manufacturing different types of missiles and weapons, but it has capped the range of its missiles to a maximum range of 2,000km.

Yet, after the US retreat from the nuclear deal and European states' pressures and insistence on talks with Iran to limit its missile program, several top military commanders in Tehran warned that such pressures could backfire.

Chief of Staff of the Iranian Armed Forces Major General Mohammad Hossein Baqeri stressed late in January that his country could change its defensive approach to offensive if its interests are endangered by enemies.

"Of course, we do not have any greedy eyes on other countries' interests and soil but it is possible that we adopt an offensive approach to protect our interests to make foreigners keep thoughts of aggression against our country's interests away even from their minds by witnessing impacts," General Baqeri said, addressing a meeting in Tehran on Jan. 27.

Then, five days later Lieutenant Commander of the Islamic Revolution Guards Corps (IRGC) Brigadier General Hossein Salami said that if Western powers seek to limit Iran’s missile power, the country will have no option but to expand its potentials in the strategically important field.

Salami made the remarks on February 3, when he reiterated that Iran’s strategy to maintain a cap on its missile power will change if the European Union and others seek to force the country into disarmament.

The remarks came amid statements by certain EU governments about the need for Iran to avoid long-range missile tests in order for the country to enjoy the economic benefits of a nuclear agreement it signed in July 2015 with world powers.

Iranian officials have repeatedly stressed that the US pressures have failed to force Tehran compromise and curb its defense and missile capabilities.

"We have (earlier) said about the missile issue that we will not compromise at all about our country's defense issues and will not allow others to interfere in it," Secretary of Iran's Supreme National Security Council (SNSC) Ali Shamkhani said last month.

He, meantime, reminded that Iran's missile capability is "defensive and deterrent".

Shamkhani referred to the US President Donald Trump's economic pressures against Iran with the aim of forcing the country to accept Washington's irrational and hegemonic demands, and said, "We will not compromise our honor under Trump's bullying. This is the clear message of the Iranian government to the White House; sanctions will no way serve as an instrument to enforce renegotiations on issues already agreed upon."

"The missile power is not negotiable. This deterrence power has been created for the country and we do not hold talks about it with anyone at all," General Hajizadeh said, addressing a forum in Tehran.

He underlined that Iran has not stopped missile tests, adding that they include long-range missiles too.

Tags: Ayatollah Seyed Ahmad Khatami Friday Prayers Leader Iran
Short Link rasanews.ir/201rLQ
Share
0
Please type in your comments in English.
The comments that contain insults or libel to individuals, ethnicities, or contradictions with the laws of the country and religious teachings will not be disclosed