We must take lessons, examples from the past 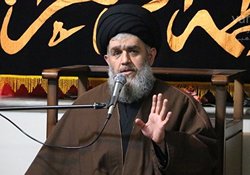 Rasa – A teacher in the Islamic Seminary of Qom said, “In the Holy Quran, the lifestyle and ‎the traditions of the Infallible Imams emphasize on the lessons learned from the nations of ‎the past.”‎

RNA – Speaking at the seventh meeting of the series of Conferences on Politics and Insight ‎was held at Qom’s Chaharmardan Mosque, Hujjat al-Islam Sayyed Hoseyn Momeni, a ‎teacher in the Islamic Seminary of Qom, and said, “In the Holy Quran, the lifestyle and the ‎traditions of the Infallible Imams emphasize on the lessons learned from the nations of the ‎past.”‎

His Eminence stressed that we must be precise in regard to the stories and situations that ‎were expressed for the people in the Holy Quran because history is of great importance. ‎History is far from a starting point and people transverse a path and arrive at the same ‎point. However, if the people want to be saved, they must take the past as an example.”‎

He added, “Mankind must examine history in order to know what has led society to rise and ‎develop and what has brought about the backwardness of societies. Sometimes a society is ‎seemingly modern but its inner nature is animalistic and humanity doesn’t exist in it.”‎

Hujjat al-Islam Momeni said that it’s not possible that human behaviour is correct regardless ‎of history and added, “Mankind is not able to be reborn and only lives once, to live again is ‎to learn from the past events in history.”‎

Expressing that precision is necessary in history, he stated, “It’s said that history cannot ‎manage the country is wrong because those who have mastered history and learned from ‎this lesson and example can easily draw the path for the future.”‎

Hujjat al-Islam Momeni said, “If the ummah distances itself from the commandments of the ‎Prophet [Muhammad], they will suffer from a life of ignorance and as long as the ummah ‎acts in accordance with the teachings of the prophets, they will move forward, otherwise ‎they will be plagued by the ignorant society.”‎

Tags: Momeni History Quran Iran Ummah
Short Link rasanews.ir/201rL0
Share
0
Please type in your comments in English.
The comments that contain insults or libel to individuals, ethnicities, or contradictions with the laws of the country and religious teachings will not be disclosed