US policies in Venezuela will be defeated 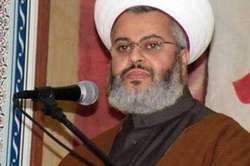 Secretary General of the Lebanese Islamic Practice Front said that the White House suppressing policies in Venezuela will be defeated.

Sheikh Zuheir al-Jeaid said, “The Lebanese Islamic Practice Front supports people and the president of Venezuela Nicholas Maduro against American coup. We strongly condemn any domination of Washington over Venezuela.”

“We stand with the Venezuelan people because (we have common goal, that is) the battle for the right, the resisting against American policies and the victory of the oppressed people”, Sheikh Zuheir added.

In this meeting, Venezuelan Ambassador, José Gonzalez praised the role of the Lebanese Islamic Practice Front in countering religious seduction in Lebanon, and said, “We stand against the arrogant US policy that seeks to plunder the aspirations of the people.”

He added that the battle against the United States is a long and costly war, “but victory ultimately belongs to our ally.”

Venezuela’s Foreign Minister Jorge Arreaza also said in an interview with Russia Today that Venezuela is well aware that the United States is actually leading the efforts to topple Venezuelan President Nicholas Maduro, but the country is still well prepared to negotiate with the opposition party.

“The US government is not only behind the coup but also leading it”, he said and added, “We have focused on defusing Washington’s attacks.”

A few days ago the US government has pushed up pressure on President Nicholas Maduro to recognize the opposition leader’s leader, Juan Guido, as the interim president of Venezuela. France, Spain, Germany, and Britain also imposed an 8 day deadline for Maduro to hold a new election.

Tags: US Venezuela Sheikh Zoheir al-Jeaid Lebanese Islamic Practice Front
Short Link rasanews.ir/201rKO
Share
0
Please type in your comments in English.
The comments that contain insults or libel to individuals, ethnicities, or contradictions with the laws of the country and religious teachings will not be disclosed