Imam Khomeyni proved the oneness of religion and politics 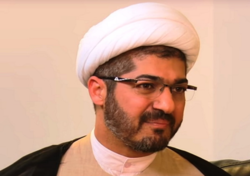 RNA – In an exclusive interview with Rasa News Agency, Hujjat al-Islam Sadiq al-Nablusi, the ‎‎speaker of Sidon’s al-Zahra Mosque, said, “The Islamic Republic of Iran is in a growing ‎‎power and influence in the region and in the Middle East. Despite the challenges ahead, there ‎‎is active presence in the region and the hand of cooperation extends to other countries in ‎‎such a way that it plays a significant role in establishing security and stability in the region.”‎

Referring to the role of the Islamic Revolution in forming a united front of Muslim groups and ‎‎groups against the global arrogance, the senior Lebanese scholar noted, “Today, the Islamic ‎‎Resistance Axis is threatening the borders of the Zionist regime and the arrogant ‎powers ‎have been confronted with computational errors and take initiative from movements ‎affiliated to the ‎colonialists and they draw the red lines for them, which has led to colonial ‎projects being ‎fruitless as a result of this.”‎

In conclusion, Hujjat al-Islam Sadiq al-Nablusi referred to the supreme personality of the late ‎founder of Iran’s Islamic Revolution, Imam ‎Khomeyni, and stated, “Imam Khomeyni is one ‎of the Islamic personalities who combined ‎religion and politics to achieve the ideals of the ‎Islamic Revolution. The Islamic system is a ‎manifestation of the combination of religion and ‎politics. He liberated the people from the yoke of oppressors and helping the ‎oppressed and ‎the deprived people of the world on the path ‎of preserving religion. He changed the political ‎movement of the ‎region and the world and revived the presence of the deprived and the ‎peoples of the region ‎in various fields and by fighting against the oppressors and the ‎arrogant powers, he changed ‎the balance of power to the benefit of the deprived so they ‎can live with dignity, honour and ‎freedom.”‎

Tags: Nablusi Lebanon Khomeini Islamic Revolution Hezbollah Islamic Resistance
Short Link rasanews.ir/201rKN
Share
0
Please type in your comments in English.
The comments that contain insults or libel to individuals, ethnicities, or contradictions with the laws of the country and religious teachings will not be disclosed