Imam Khomeyni is the spiritual father of the Islamic ummah 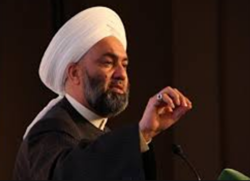 Rasa – Shaykh Khalid al-Mulla said that the basis of the Imam Khomeyni’s uprising against the ‎Pahlavi regime and the arrogant powers was support for the oppressed people of the world ‎and said, “Imam Khomeyni is the spiritual father of the Islamic ummah.”‎

RNA – In an exclusive interview with Rasa News Agency on the fortieth anniversary of the ‎return of Imam Khomeyni from fifteen years of exile, Shaykh Khalid al-Mulla, the chairman of ‎the Scholars Council of Iraq, ‎described the dimensions of the personality of Imam Sayyed ‎Ruhollah Mousavi-Khomeyni, the late founder of Iran’s Islamic Revolution, and said, “Imam ‎Khomeyni was a divine personality who presented a great divine project and such a ‎personality is very different from the other leaders, shaykhs and the emirs in the region, ‎whom the arrogant powers have put into power in order to fulfill their goals in the region.”‎

The Iraqi Sunni cleric added, “Imam Khomeyni was a great man who emerged with the divine ‎concept of helping the oppressed people of the world and defending Islamic unity and ‎Muslims. This is while the United States is trying to defeat the Islamic ummah in an ‎unprecedented way through the Arab Spring, or more precisely, the Arab Hell.”‎

Stressing that support for the oppressed people of the world are at the heart of the ‎Islamic Revolution, he noted, “Imam Khomeyni is a contemporary man who was able to ‎support the weak and oppressed people of the world, whether Muslim or non-Muslim. In ‎fact, in connection with the defence of humanity, he has left the vicinity of his grandmother, ‎Amir al-Mu’minin [Imam Ali], and the Islamic ummah considers him as their father.”‎

In another part of his speech, Shaykh al-Mulla explained that the Supreme Leader of the ‎Islamic Revolution, Ayatollah Sayyed Ali Khamenei, is the leader of the Islamic ummah and ‎stated, “In the case of Ayatollah Khamenei, we must say that during the holding of various ‎seminars and conferences, he is remembered for his goodness. The Islamic ummah expects ‎him to give the most support to the weak and oppressed whom the oppressors abuse and ‎to keep them out of the grip of the Zionist regime so that they can their normal life just like ‎other people.”‎

Tags: al-Mulla Khalid al-Mulla Iraq Sunni Khomeini Iran Islamic Revolution
Short Link rasanews.ir/201rK8
Share
0
Please type in your comments in English.
The comments that contain insults or libel to individuals, ethnicities, or contradictions with the laws of the country and religious teachings will not be disclosed