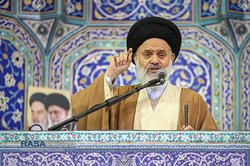 Rasa – Ayatollah Hoseyni-Bushehri said, “Imam [Khomeyni], as a source of emulation at the ‎peak of mysticism, spirituality and the recognition of God, formulated the political thought of ‎Islamic rule and spirituality was placed alongside politics.”‎

RNA – In his Friday prayer sermon to a large and fervent crowd of believers in Qom’s Quds ‎‎Prayer Hall, Ayatollah Seyyed Hashem Hoseyni-Bushehri commemorated the beginning of ‎Ten Days of Dawn of the Islamic Revolution and said, “The 12th of Bahman [February 1st] is ‎the anniversary of the dignified day of the return of Imam Khomeyni to Iran such that the ‎Great Leader of the Revolution and nation of Iran won victory over the tyrants.”‎

The member of the board of directors of the Assembly of Experts ‎stressed, “Cultural officials ‎must explain the dark era of the Pahlavi regime to the people, especially the youth. The ‎achievements of the Islamic Revolution over the last forty years also must be explained to ‎the people. We must know that we are still at the beginning of this path and we haven’t ‎reached the coast and the obstacles on the path must be pointed out for society.”‎

He stated that the enemies are constantly fighting and attacking the Revolution and said, ‎‎“The enemies have pursued and continue to pursue its objectives through the various ‎means, including through coup d’états, assassination attempts, war, economic blockades, ‎economic war and psychological warfare and the battle between right and wrong is always ‎continuing.”‎

Referring to the gifts of the late Imam’s movement and the political school of the founder of ‎the Islamic Revolution, Ayatollah Hoseyni-Bushehri said, “Combining spirituality with politics ‎was an important achievement of the Imam’s movement, politics was hated even in the ‎seminaries and among the religious people but Imam, as a source of emulation at the peak ‎of mysticism, spirituality and the recognition of God, formulated the political thought of ‎Islamic rule and spirituality was placed alongside politics.”‎

The secretary of the Supreme Council of the Islamic Seminary considered the independence ‎of the country as one of the important symbols of the Islamic Revolution and added, “Iran ‎was in the hands of foreigners and they ruled the country. Religious democracy was another ‎achievement of the Revolution. In the past, the people weren’t the decision-makers of the ‎people but rather the government chose representatives and officials but with the ‎Revolution, the people were the determiners.”‎

He added, “The work of the enemies is bullying and today we see what they want to do in ‎Venezuela. The person who is an American spy [Juan Guaidó] has been introduced as the ‎new president of the country and they want to overthrow the person for whom the people ‎voted for and who is the president according to the law [Nicolás Maduro], so that they can ‎put the person whom they want in power. The Revolution is opposed to the spirit of ‎arrogance, oppression and criminality.”‎

Ayatollah Hoseyni-Bushehri pointed out, “The enemies had seen turbulent dreams about the ‎Revolution and they wanted to prevent the Revolution from reaching its fortieth anniversary ‎but the enemies’ failed to achieve what they had dreamed about and we are on the verge of ‎this great celebration, which must be celebrated with more glory than in previous years ‎because the Revolution is a thorn in the eyes of the enemies and assurance for the hearts of ‎the friends of the Revolution.”

Tags: Bushehri Islamic Revolution Iran Khomeini Venezuela
Short Link rasanews.ir/201rJ9
Share
0
Please type in your comments in English.
The comments that contain insults or libel to individuals, ethnicities, or contradictions with the laws of the country and religious teachings will not be disclosed