Youth is the best time for strengthening the soul 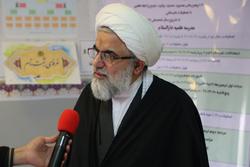 Dean of the Dar al-Salaam Seminary said that the youth age is the best time for strengthening the soul and planning.

RNA - In his ethic class, Hojat al-Islam Hossein Eskandari, dean of the Dar al-Salaam Seminary in Tehran, Iran, said, “Men and women should each be in the position, appearance and form that God has appointed for them”.

“Due to the different capacities of men and women, God has appointed different type of veil for them”, he said.

“We must all be careful about the ways we make money and for that one may endanger his mundane and Hereafter life, and if he does not see the effects of his wrongdoings in this world for making money, in the hereafter he will encounter their consequences”, he continued.

“Youth age is the best time for planning and strengthening the soul and that golden era should not be passed ignorantly by negligent and worldly euphoria and should take advantage of this era”, at the end of his ethic class, the Seminary professor and the Dean of Dar al-Salam in Tehran Seminary insisted.

Tags: Seminary soul Youth
Short Link rasanews.ir/201rIa
Share
0
Please type in your comments in English.
The comments that contain insults or libel to individuals, ethnicities, or contradictions with the laws of the country and religious teachings will not be disclosed