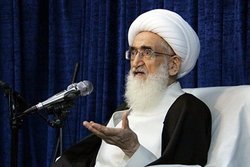 RNA – In a meeting with members of the Congress of Martyred Defenders of the Holy ‎Shrines [in Syria] of Qom province, Grand Ayatollah Hoseyn Nouri-Hamadani noted that jihad ‎and martyrdom are the means ‎to achieve dignity and said, “The late Imam Khomeyni said ‎that every prophet was chosen by God and in one hand, he had a ‎book, and in the other ‎hand, the means of jihad was placed.‎"‎

The revered source of emulation stated that jihad on the path of God is necessary of religion ‎and stated, “In one hand, the Holy Prophet [Muhammad] had the Holy Quran and in the ‎other hand, he had a sword. All good is based on the existence of jihadi power.”‎

He noted that on the Resistance Front there was a siege consisting of Americans, ‎Zionists, ‎Saudi Arabia and the trainers of Daesh and on the other hand, the Front of Pure Islam and ‎those with ‎certainty and faith are standing. The Defenders of the Holy Shrines are considered ‎as the peak of the faithful.‎

The prominent teacher in the Islamic Seminary of Qom said that the Defenders of the Holy ‎Shrines revived the greatness of Islam as inspired by Lady Zaynab and said, "It was the ‎‎providence of God when Lady Zaynab went to Damascus after being present in Karbala and ‎Madinah and until today, ‎her holy shrine is the source of the spreading and expansion of the ‎Islamic awakening.‎"‎

Emphasizing that the principles of jihad ‎and martyrdom must be explained to the people, ‎Ayatollah Nouri-Hamadani stated, “The atmosphere of the Defenders of the Holy Shrines is ‎the atmosphere of the victory of blood over the sword because these noble men created ‎dignity for Islam through their blood.” ‎

Tags: Nouri Zaynab Defenders of the Holy Shrines
Short Link rasanews.ir/201rIO
Share
0
Please type in your comments in English.
The comments that contain insults or libel to individuals, ethnicities, or contradictions with the laws of the country and religious teachings will not be disclosed