The Great March of Return protests inspired the Islamic ummah 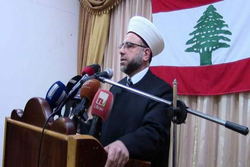 Rasa – Shaykh Abdul-Razzaq said, “The ‘Great March of Return,’ inspired the Islamic ‎ummah and demonstrated the resistance of the Palestinian people against the Zionist ‎occupying regime.”‎

RNA – In a speech, Shaykh Maher Abdul-Razzaq, the head of Lebanon’s Reformation ‎and Unity Movement, ‎said that the national consensus government is taking steps ‎towards the interests of the Lebanese people and doesn’t pay attention to partisan, ‎ethnic and religious interests.‎

The Lebanese Sunni cleric added, “American-Zionist plans in the region are a serious ‎threat to Muslims and Arabs and therefore, it’s imperative for all Muslims and Christians ‎to unite and defeat their evil plans.”‎

He stated, “Through the unity of the Lebanese people, the Arabs and the Muslims, we ‎can defeat the arrogant powers from our national resources and not allow them to ‎spread sedition in the world.”‎

Shaykh Abdul-Razzaq argued that the issue of Palestinian liberation is important and an ‎issue of priority in the Arab and Islamic countries and stated, “Any normalization of ‎relations with the Zionist regime is a betrayal to the Arabs, Muslims and humanity. ‎Therefore, the Arab and Islamic countries must support the Islamic Resistance Front ‎‎[Hezbollah] in Palestine and Lebanon because it is the power of the Islamic ummah and ‎protects the dignity and sovereignty of the Islamic and Arab countries.”‎

Tags: Abdul-Razzaq Lebanon Palestine Hezbollah Resistance
Short Link rasanews.ir/201rID
Share
0
Please type in your comments in English.
The comments that contain insults or libel to individuals, ethnicities, or contradictions with the laws of the country and religious teachings will not be disclosed