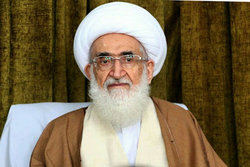 Rasa – The revered source of emulation said, “Today, Islamic gatherings and worship have ‎taken on a struggle ‎because it exhibits the power and majesty of the Islamic world to the ‎enemies.”‎

RNA – Grand Ayatollah Hoseyn Nouri-Hamadani met with Hujjat al-Islam Sayyed Ali Qazi-‎‎Askar, the representative of the Supreme Leader in Hajj and Pilgrimage Affairs, and Alireza ‎‎Rashidian, the head of the Hajj and Pilgrimage Organization, and referred to the importance ‎‎of the issue of Islamic governance and said, “Divine worship will become more important ‎‎when it finds social aspects.”‎

The revered source of emulation considered the Hajj pilgrimage as the largest Muslim ‎‎gathering and said, “Today, Islamic gatherings and worship have taken on a struggle ‎‎because it exhibits the power and majesty of the Islamic world to the enemies.”‎

Stating that today, the Muslim world stands against the world of ‎the infidels, he stated, “The ‎massive Hajj pilgrimage, whether willingly or unwillingly, has the aspect of a struggle because ‎‎Wahhabism, which is hostile to the Shi’iah, is based in Saudi Arabia.‎”‎

Ayatollah Nouri-Hamadani noted that Wahhabism is considered a tragedy because of its ‎policies and beliefs, which is ‎why it is always at war with Yemen’s Zaydi Shi’ahs.‎

Noting that Wahhabism has come to the battlefield against Shi’ah beliefs today, he stressed, ‎‎“We must always be vigilant and act in an intelligent manner in confronting this phenomenon. ‎Today, Wahhabism is lying that it isn’t a political movement because it is always plotting ‎against the Shi’ah school of thought.”

Tags: Nouri Hajj Islam Shia
Short Link rasanews.ir/201rIB
Share
0
Please type in your comments in English.
The comments that contain insults or libel to individuals, ethnicities, or contradictions with the laws of the country and religious teachings will not be disclosed