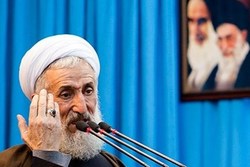 RNA - Addressing a large and fervent congregation of the people in Tehran on Friday, Hojjatoleslam Seddiqi asked Iranian officials, "What guarantee is there if you sign the FATF no further restrictions and pressures will be imposed against Iran?"

"It is against our cultural independence to accept whatever the enemies decide for us in their think tanks because we follow the orders by the Holy Quran and Prophet Mohammad (PBUH)," he added.

The senior Iranian cleric underlined that accepting the FATF will become a prelude to more sanctions and pressures.

According to Fars News Agancy, to fulfill FATF requirements, President Hassan Rouhani’s administration has proposed four bills to the parliament for approval, two of which are still undecided, including the Palermo Convention. They have been referred to the Expediency Council for final approval.

Iran recently approved anti-money laundering (AML), which was a domestically-developed bill, and it voted to join the CFT standards set by the FATF for years.

Tags: Hojjatoleslam Kazzem Seddiqi FATF Iran
Short Link rasanews.ir/201rHc
Share
0
Please type in your comments in English.
The comments that contain insults or libel to individuals, ethnicities, or contradictions with the laws of the country and religious teachings will not be disclosed