The Islamic Resistance was victorious over US, Zionist regime 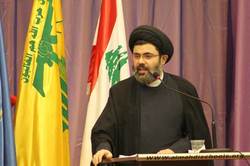 Rasa – Hujjat al-Islam Safiuddin described the withdrawal of the United States from Syria as ‎‎“humiliating.”‎

RNA – Speaking to a group of scholars and congregational prayer leaders in the southern ‎Lebanese southern city of Tyre, Hujjat al-Islam Sayyid Hashim Safiuddin, the chairman of the ‎Executive Council of ‎Hezbollah, described the withdrawal of the United States from Syria as ‎‎“humiliating” and added, “Arab countries and some people in Lebanon must know well that ‎the United States is the country that has abandoned them many times in the past and now ‎and will do it again in the future.”‎

The revered Lebanese Shi’ah scholar argued, “The United States is using its allies as its last ‎leverage in order to reach an agreement with Iran over Syria and seeks to achieve the same ‎goals that it couldn’t achieve through its military power through negotiations.” ‎

Hujjat al-Islam Safiuddin described some Arab government officials as ‘fools,’ adding, “This ‎foolishness of some Arab countries prevents them from understanding the fact that the ‎United States has left them alone so many times and is currently abandoning them alone for ‎fourth and fifth times but unfortunately, they’re still in love with the United States and the ‎United States is laughing at them, just as it used to do before.”‎

He emphasized that in 1996, the United States mobilized all of the European and Arab ‎countries in the Egyptian resort town of Sharm al-Shaykh to “Stop the Islamic Resistance ‎movement but failed to achieve its sinister goals.”‎

Tags: Safiuddin Lebanon Hezbollah Islamic Resistance
Short Link rasanews.ir/201rGw
Share
0
Please type in your comments in English.
The comments that contain insults or libel to individuals, ethnicities, or contradictions with the laws of the country and religious teachings will not be disclosed