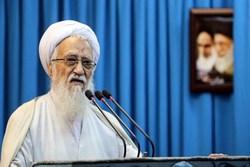 RNA - Addressing a large and fervent congregation of the people in Tehran on Friday, Ayatollah Movahedi Kermani said, "FATF has been designed by the US Treasury Department to control other countries' financial resources; combating money-laundering and financing terrorist groups (as claimed by FATF) are not true as the main sponsors of terrorist groups are Europe, the US and Israel."

Iran recently approved anti-money laundering (AML), which was a domestically-developed bill, and it voted to join the CFT standards set by the FATF for years.

Tags: FATF Iran Friday Prayers Leader Ayatollah Movahedi Kermani
Short Link rasanews.ir/201rFz
Share
0
Please type in your comments in English.
The comments that contain insults or libel to individuals, ethnicities, or contradictions with the laws of the country and religious teachings will not be disclosed