Axis of Evil lost control of the Middle East 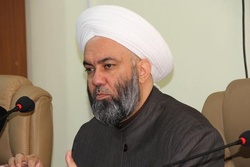 Rasa – The head of Iraq’s Union of Islamic Scholars said, “The Axis of Evil lost control of the ‎countries after facing the Islamic Resistance Front headed by Ayatollah Khamenei.”

RNA – In an exclusive interview with Rasa News Agency, Shaykh Khalid al-Mulla, the head of ‎Iraq’s Union of Islamic Scholars stated, “The Axis of Evil seeks to destroy roots of Islam in ‎the region, specially the Shi’ah Islam, so that the Zionist regime can be able to dominate a ‎humiliated Middle East.”‎

The Iraqi Sunni cleric added, “After facing the Islamic Resistance Front headed by the ‎Supreme Leader of the Islamic Revolution [Ayatollah Khamenei] in the region, the evil ‎countries lost control of the regional countries and that’s why some Arab countries have re-‎established their embassies in Syria in order to reach back to their previous situation and ‎start a new plan against Islam with the help of the Zionist regime.”‎

Mentioning “the diplomatic victory in Syria,” he noted the relationship between Riyadh’s ‎defeat in Syria and the “Deal of the Century” saying, “Saudi Arabia is the designer of the ‎‎‘Deal of the Century.’ They’ve started dismissing some officials like Adil al-Jubayr and ‎appointing some other officials following their defeat in their foreign affairs’ policies, ‎especially in Syria. They’ve done so in order to take stronger steps toward reaching the ‘Deal ‎of the Century’ regarding Palestine.”‎

Shaykh al-Mulla stated, “Omar al-Bashir [President of Sudan] is a tool in the hands of the ‎Saudis. He wants to coordinate the Syrian case and destroy the Islamic identity of the Arab ‎countries with the help of the Zionist regime. But the Muslim and vigilant people of Sudan will ‎not allow him to do so. They will not allow Donald Trump’s recent speech regarding the ‎destruction of the Islamic identity in the region for the purpose of American domination over ‎the region to be realized.”‎

Tags: Khalid al-Mulla Iraq Iraq Iran Khamenei Islamic Resistance Front
Short Link rasanews.ir/201rFm
Share
0
Please type in your comments in English.
The comments that contain insults or libel to individuals, ethnicities, or contradictions with the laws of the country and religious teachings will not be disclosed