Iran defies the enemies threats and sanctions with patience and resistance 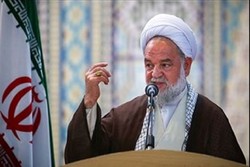 Rasa – Hujjat al-Islam Yaqoubi said, “Despite the continuation of threats and sanctions by ‎the enemies, the Iranian people overcome the enemies with resistance and reliance on ‎internal power.”‎

RNA – In a meeting with officials of North Khorasan province, Hujjat al-Islam Abolqasem ‎Yaqoubi, the representative of the Supreme Leader of the Islamic Revolution in North ‎Khorasan province, emphasized upon the necessity of proper service by the authorities to ‎the people and considered forbearance and patience as among the requirements of true ‎reverence for the clients in the administrative offices. ‎

The Friday prayer leader of Bojnourd said that the tools of a manager and official are ‎forbearance and patience and noted, “In Nahj al-Balaghah [The Peak of Eloquence], [Imam ‎Ali] said that the person who wants to be an official must first establish forbearance in ‎himself as his weapon.”‎

He pointed out that the students of the Imams had a great deal of patience and tolerance ‎and said, “Malik al-Ashtar was passing by an alley. An ignorant person dumped garbage on ‎him. A person who saw this incident told the ignorant person, ‘This person is the commander ‎of the army of Imam Ali’ and the person rushed to him to apologize and saw that Malik was ‎supplicating in the mosque. When he went to him in order to apologize, Malik said ‘I had ‎come to pray for you.’”‎

Hujjat al-Islam Yaqoubi stressed that we must not rush in our judgement and said, “In Nahj ‎al-Balaghah [Imam Ali] said, ‘If you cannot be forbearing, feign to do so because it is ‎seldom that a man likens himself to a group and does not become as one of them.”‎

The head of the provincial council of the Islamic Seminary of North Khorasan added, “Imam ‎Ali said, ‘Forbearance is (like) a kinsfolk (a supporter of goodness).’ With forbearance, the ‎followers of a person will increase and a patient and forbearing person is respected by the ‎people.”‎

He stated that with the existence of some economic and livelihoods in the country, adding, ‎‎“Imam Ja’far al-Sadiq said, ‘We [Imams] are patient, but our Shi’ahs are indeed more patient ‎than us. We have patience while we know [the wisdom behind our difficulties] but you are ‎patient while you don’t know.’ This is because our Imams have the knowledge of the ‎unseen. They were aware of the future and behind the scenes and for this reason, patience ‎was easier for them.”‎

The teacher of jurisprudence in the Islamic Seminary of North Khorasan said, “Shi’ahs, ‎despite the fact that they have no knowledge of the unseen, remain on the scene, and while ‎they don’t know a lot of issues, they are satisfied with the satisfaction of God. But the ‎Immaculate Imams are aware of the unseen and endure it and as result of the level of the ‎patience of the Imam is greater.”‎

In conclusion, Hujjat al-Islam Yaqoubi stated, “Despite the continuation of the threats and ‎sanctions of the enemies, the Iranian people can resolutely overcome this difficult path with ‎patience and resistance and reliance on their internal capabilities and abilities again and ‎continue on their path to the peaks of progress and material and spiritual excellence.” ‎

Tags: Yaqoubi Iran Nahj al-Balaghah forbearance Imam Ali Shia Bojnourd
Short Link rasanews.ir/201rFX
Share
0
Please type in your comments in English.
The comments that contain insults or libel to individuals, ethnicities, or contradictions with the laws of the country and religious teachings will not be disclosed