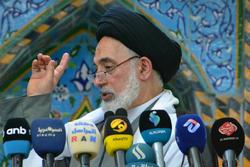 Hujjat al-Islam Qobanchi said that relation with Israel is impossible.

RNA- Hujjat al-Islam Seyed Sadreddin Qobanchi, pointed to the demand of some Iraqi politician about the relation with Israel and said, “Iraq recognizes Israel as an occupier regime so it will never recognize Israel (as a legitimate state)”.

Pointing to the US Secretary of State, Pompeo’s unannounced visit to Iraq and his demand about continuing presence of the US Army in the Arab country, Qobanchi said, “In addition to the opposing the US army presence in Iraq, we call for their withdrawal from the country. The Iraqi people can afford to support themselves, so we do not need US troops.”

“Politicians and lawmakers should immediately choose the members of the Ministries specially defense and home ministries members. They should choose proper persons for these posts”, Referring to recent political events of the Iraq and the region, Qobanchi told the Friday Prayer audiences in holy city of Najaf, Iraq.

In religious sermons of the Friday Prayer, Qobanchi congratulated Lady Zaynab (AS) birthday anniversary and said, “Lady Zaynab played a key role in maintaining Prophet Muhammad’s message (and the path) and confronting the oppressor and ruthless people”.

Hujjat al-Islam Qobanchi concluded his speech with the importance of the Salat Al-layl (Night Prayer) in a Nabawi Hadith and wanted people to perform it or at least say the two last parts, Shafe and Watr.

Tags: Iraq Qobanchi Friday Prayer
Short Link rasanews.ir/201rFL
Share
0
Please type in your comments in English.
The comments that contain insults or libel to individuals, ethnicities, or contradictions with the laws of the country and religious teachings will not be disclosed